Allahabad became the capital of the newly formed United Provinces after the Indian Mutiny of 1857-58. The High Court of Judicature for the North-Western Provinces was located in Allahabad.

The High Court of Judicature for the North-Western Provinces was transferred to Allahabad from Agra in 1869. In 1887, the University of Allahabad was founded and All Saints Cathedral was consecrated. 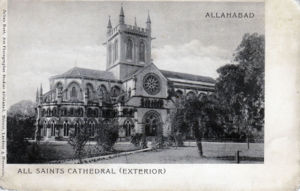 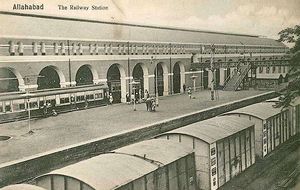 The railway station at Allahabad

Allahabad was an important junction on the main line of the East Indian Railway. Here, the line from Calcutta bifurcated with one line running north to Delhi and the other south-west to Jubbulpore where there was an end-to-end connection with the Great Indian Peninsula Railway's main line from Bombay. In 1925, when both the EIR and GIPR became state railways, the section from Jubbulpore to Allahabad was transferred to the GIPR. The Oudh and Rohilkhand Railway had a terminus at Allahabad. 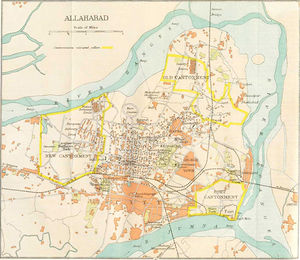 Muir Road Civil Cemetery Allahabad with Photograph of the entrance. This cemetery is known to locals as "Rajapur Cemetery" or "Rajapur Kabristaan" (in Hindi).
Both findagrave.com. There also appear to be some smaller cemeteries in Allahabad, with details of only a few graves listed on findagrave.com, which may be located using the Search.