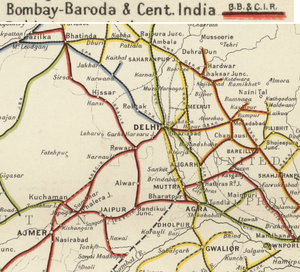 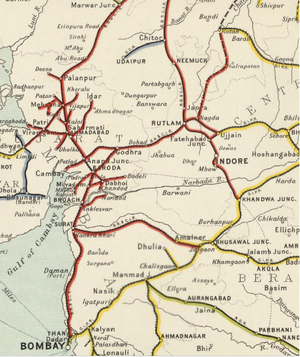 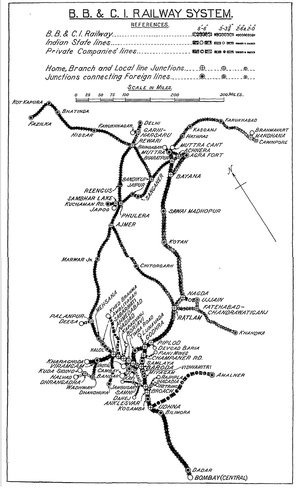 In 1852 John Pitt Kennedy was introduced in London to Lieutenant-Colonel French, who had been Acting Resident at the Court of the Guicowar of Baroda. Colonel French wanted to get up a company to construct a line of railway from Baroda to Tankaria Bunda, in the gulf of Cambay, a distance of about 45 miles. Colonel Kennedy joined him, but instead of the original line proposed, they projected what became the Bombay, Baroda, and Central India railway [2].

Their object was to open the most effectual line from Bombay, through the central and north-western districts, to meet the railway in progress of construction from Calcutta to Delhi, together with all the branches that such a line could require. In 1853 the Bombay, Baroda and Central India Railway Company(BB&CIR) was formed with Colonel John Pitt Kennedy appointed as consulting engineer and managing director. A staff of engineers was sent to Bombay, and during the cold season of 1853, comparative surveys, sufficient to lay a well-considered scheme before the Government, were made [2].

On the 3rd of November, 1854, the Governor-General, Lord Dalhousie, sanctioned the construction of the sections Broach, and Baroda, to Ahmedabad, leaving the remainder of the scheme for future decision, and the work to be commenced at Bombay. The Home Government, however, decided that the work should be commenced at Surat [2]. Although on flat country, this. line had to traverse some of the mightiest rivers and water channels in the country including the Nerbudda Bridge near Broach and the Taptee Bridge near Surat

Construction commenced in 1855 and began work on track from Baroda to Surat. By 1865, the Bombay-Surat-Baroda-Ahmedabad route was complete in 1867. The Bombay Back Bay suburban service commenced in 1870 with one train in each direction each day. In 1871 the Bombay-Ahmadabad Main Line was extended north to Viramgam to 350 miles (563km).

The “1870-71 Annual Report for Indian Railways for the BB&CIR“ gives:- ‘Broad Gauge (BG) Line sanctioned 391 miles(629km), total line opened 312 miles(502km) and 72 miles(116km) to be finished’. The Report also details of the ‘progress of the railway and the commercial summery’ - see separate pages for details.

Management of the BB&CIR passed to the GoI on 1 January 1942.

In 1951, the BB&CIR was split to form three Zones of Indian Railways:-

In 1918 the total length of line being worked as the BB&CIR system (both owned lines and managed/worked lines) was 3823 miles(6150km) opened plus a further 254 miles(407km) under construction or sanctioned for construction [5] .

The BB&CIR also managed, worked and maintained a number of mixed gauge lines on behalf of other parties.

See separate pages for details of the Stations and Rail System into the following major Cities:-

An on-line search of the IOR records relating to this railway [6] gives a large number of references. The most important being:-

Unfortunately, there are no BB&CIR staff records held in the India Office Records at the British Library.

Only some records that have been found from different sources:-