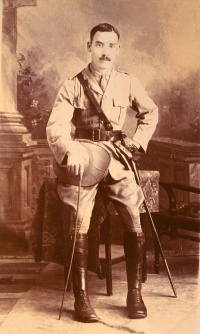 This event is part of the First World War

The Mesopotamia Campaign was fought from November 1914 to November 1918 between the Allies represented by the British Empire, mostly troops from the Indian Empire, and the Central Powers, mostly of the Ottoman Empire.

However the country actually remained a theatre of warfare until a peace treaty was ratified in 1924. Large numbers of troops from India were sent to deal with a revolt in 1920[1]

Details of some of the protagonists in the campaign

Wounded and other ill soldiers from Mesopotamia were sent to India for treatment and convalescence. Some of these sadly became part of the group of soldiers who died in India.[4]

A description of some of the hospital ship voyages and the hospitals in India may be found in the chapter "Australian Nurses in India 1916-1919" page 124 With Horse and Morse in Mesopotamia, see Historical books online below.

Troops under the control of the Army in Mesopotamia took part in actions in Persia, and later Transcaucasia. See Norperforce.

Most of the diary entries are for 1921. It is difficult for some/all browsers to navigate this website, see hints below if you want to read additional entries.[5]

Records of the Survey of India, Volume 20. The War Record 1914-1920 1925. If the download button does not display, locate in Books/Survey Of India, or Direct link PAHAR Mountains of Central Asia Digital Dataset. Google Books version (now full view). Archive.org version. Work of Royal Engineers and other staff of the Survey of India mapping in various theatres of war, in Mesopotamia, Kurdistan, Macedonia, Arabia, Persia, Palestine, East Africa and Afghanistan.
Maps for Mesopotamia, not generally available online, are to be found in The National Archives[UK] series WO 302

There were subsequent publications Order of Battle of Divisions Part 5A, Divisions of Australia, Canada and New Zealand and those in East Africa, compiled by F.W. Perry c 1992. Available at the British Library UIN: BLL01006378898 and Order of Battle of Divisions. Part 5B, Indian Army Divisions compiled by F. W. Perry c 1993 available at the B.L. UIN: BLL01008151437 . The latter is also catalogued with the additional title History of the Great War : based on official documents.

Note, this report also contains the Vincent Bingley report into the medical situation as Appendix I. In addition, separately Appendices To The Report Of The Commission For Medical Arrangements In Mesopotamia Vol-II (July 1916). Archive.org. Volume 1 of these Appendices does not appear to be available online, (National Archives reference CAB19/27).
Report of the Committee on the Lessons of the Great War 13 Oct 1932 includes "Appendix V Mesopotamia" (Details[9].) Also known as the Kirke Report it is available in a reprint edition,[10] which in turn is available online on the Ancestry owned pay website fold3, located in Military Books-located by the Search/Britain.

From the Gulf to the Caspian : being the souvenir booklet of the 33rd. Motor Ambulance Convoy which served in Mesopotamia and North Persia, 1916 to 1919 written by various members of the unit who remain anonymous. [1920?] State Library of Victoria. This Unit consisted of Army Service Corps personnel, together with Royal Army Medical Corps personnel.
The Royal Army Service Corps: A History of Transport and Supply in the British Army, Volume II by Colonel R H Beadon 1931. Archive.org version, mirror from Digital Library of India. Includes the First World War period, with a chapter on Mesopotamia.

The Inland Water Transport in Mesopotamia compiled by Lieut.-Col. L. J. Hall, RE. 1921 Archive.org
"Inland Waterways and Docks, Royal Engineers in War Time, with special reference to the mystery port of Richborough (Lecture & Discussion)" by Captain A E Battle, RE Proceedings of the Victorian Institute of Engineers 1923-1924, pages 104-116. Includes Inland Water Transport in Mesopotamia, and brief mention of other theatres of war. Melbourne University Digital Collection.

Townshend of Chitral and Kut: Based on the diaries and private papers of Sir Charles Vere Townshend by Erroll Sherson 1928. Archive.org version, mirror from Digital Library of India.

A History of the Black Watch (Royal Highlanders) in the Great War 1914-1918 [in three Volumes] Edited by Major General A G Wauchope 1926. Volume One including 2nd Battalion in Mesopotamia page 203. Digital [email protected] University Library.

A revised second edition was published for Volume 3 1940, whose dustjacket cover states "Important revisions" including in respect of the Dardanelles and Mesopotamia.[16]. A facsimile reprint of the 2nd edition of Volume 3 was reprinted by Imperial War Museum/Battery Press in 1995 (available at the British Library UIN: BLL01011725482) and it is possible that the reprints available from Naval & Military Press, which are in turn available on the Ancestry owned pay website fold.3, (located in Military Books-located by the Search/Britain) contain the revised editions.

Arabian Adventures : Ten years of joyful service by John Glubb (Sir John Bagot Glubb) 1978. The period from 1920, when he was posted as a member of the Royal Engineers. Archive.org Books to Borrow/Lending Library. John Bagot Glubb Wikipedia.

The Letters of Gertrude Bell published 1927. Archive.org, Digital Library of India Collection.Volume I, Volume II. Mainly letters sent to her family. Volume II is in respect of her time in Baghdad 1917-1926.