Mule Corps and other Army mules.

Mules formed part of the supply and transport section of armies and were particularly popular with expeditionary forces which had to travel over rougher terrain. A mule driver is called a muleteer.

Mule Corps of the Indian Army

Prior to 1884 no permanent transport department was established in the Indian Army and animals, carts and drivers were hired locally when required. Between 1884 and 1887 a separate transport corps existed. This became known as the Commissariat Transport Department and was under the control of the Military Department.

The mule corps played an integral part in the various theatres of war during the First World War such as France, Gallipoli, Egypt and Basra. 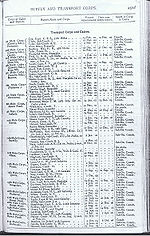 Details of where the individual sections of the Mule Corps were based each year are included in the annual Indian Army Lists under the section entitled "Supply and Transport Corps". (An example page from 1905 is shown).

At Gallipoli during the First World War there were Four Mule Cart Corps, each comprising 650 men and 1086 mules.[2]

There was also a British Army regiment called the Macedonian Mule Corps established in the summer of 1916 by the British Salonica Army and the Cyprus colonial government, (also known as the Cypriot Mule Corps). These men served mostly in Salonica during the war and in Istanbul after the armistice. [3] A regimental history, The Macedonian Mule Corps 1916-1919 : some records, compiled by Major J.P.B. Condon (1979, Nicosia) is available at The National Archives Library, and Imperial War Museums. The following histories are available at the British Library: Serving the empire in the Great War : the Cypriot Mule Corps, imperial loyalty and silenced memory by Andrekos Varnava UIN: BLL01018230538 ; The Cypriot Mule Corps in the First World War by Nur Çetine UIN: BLL01018781384 .

Also see The National Archives record entry WO 405 The Macedonian Mule Corps in World War I, which includes a searchable database.

A chapter about mules is included in Tales of the Mountain Gunners an anthology compiled by those who served with them and edited by C. H. T. MacFetridge and J. P. Warren. Edinburgh : Blackwood, 1973.
An anthology of tales and short stories about one of the most unusual and colourful units in the history of the British Empire: the Mountain Artillery. Its reputation for action attracted a collection of adventurous, able and eccentric officers; usually with a combination of all three qualities. See Military reading list - Army - Other - List of books recommended by Peter Moore. Another reader said "I cannot recommend too highly Tales of the Mountain Gunners. It is simply enthralling, moving, funny, inspiring and wonderful. It would be in my top 10 books never to part with.[4]
Chapters include: in the days work, good fighting, the soldier, the mule, the gun, some characters and more.[5]

"Chapter X: The Mule" page 275 Animal Management 1923 HathiTrust Digital Library
There is a 1933 edition, previously, but no longer, available online.

Handbook for the 2.95 inch q.f. mountain gun, mark I mule equipment. 1906. Published London. With plates, including Mule plates. State Library of Victoria.
Handbook of the q.f, 3.7-inch mountain howitzer, mark I, 1921 State Library of Victoria. The handbook contains text relating to the loading of mules, but not the illustrative plates which were issued separately. (The digital file may be slow to download)