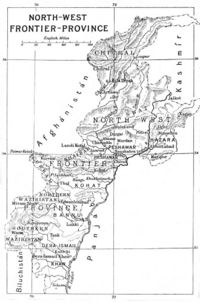 Map of the province

North West Frontier Province was created out of Punjab in 1901. It was part of the Bengal Presidency and it is now a province of Pakistan. In April 2010, the name of the province was official changed to Khyber-Pakhtoonkhwa by passage of an amendment to the Constitution.

It consisted of five districts.

The following princely states were located in the region and included into it after Partition.

For images see: Forts of the Frontier