Difference between revisions of "13th Regiment of Foot" 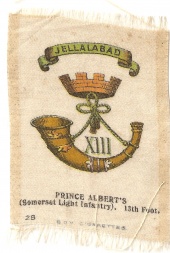 Crest of 13th Regiment of Foot

Known as The Somersetshire Regiment

The 4th and 5th Battalions of the Somerset Light Infantry arrived in India in November 1914. A regimental history was written about the 2/5th Battalion, Somerset Light Infantry, which describes experiences of the Territorials in India called A Strange War: Burma, India and Afghanistan 1914-1919 by C P Mills. The story is told through the diary of Company Quarter Master Sergeant Ed Ewens written in 1928, and the memories of Bertie Rendell recorded for the IWM. The book includes many photographs taken by Bertie Rendell.

Garrison Battalions were made up of soldiers unfit for front line duty. 1st Garrison Battalion, Somerset Light Infantry  was formed in Plymouth in January 1917 and   moved to India in February 1917. Subsequently it joined Rawalpindi Brigade in 2nd (Rawalpindi) Division.