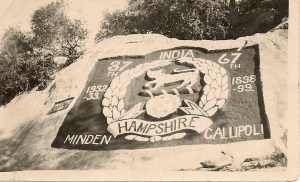 1/5th Battalion "arrived in Bombay on 9th November, 1914, and proceeded to Allahabad. Volunteers were called for to go to Mesopotamia (1 officer and 50 o.r.), and in 1915 the battalion was split up and detachments sent to various spots until reassembling at Fyzabad in March 1916. They then appear to have done a Grand Tour of cantonments, even taking in several months in Burma in 1918 (!). More fun in the Punjab in early 1919, dealing with riots, before taking part in the Afghan campaign in May/June 1919 (temperatures of 125 degrees F in the tents ... nice) before departing in October and arriving back in Southampton on 8th November 1919".[2]

Oswald S. Early was a First World War wireless operator with the 1/9th Battalion Territorial Force of the Royal Hampshire Regiment, serving from 1916 to 1919 in India, Iraq and Afghanistan. He kept a diary which was later published.[3]

Refer next section for photographs.