Difference between revisions of "Ajmer"

Ajmer City was the administrative headquarters of Ajmer District in the province of Ajmer-Merwara. It is now the largest city in Rajasthan.

There was a cantonment at Ajmer, and elsewhere in the province at Nasirabad (14 miles away) and Deoli. Further details are given in this link[1]

C 1859, there was a detachment of the Mhairwarrah {Mharwarrah, Mharwarra) Battalion , a Local Infantry or Irregular Corps, stationed at Ajmere.[2] There were also troops of the Battalion at Bewar (Bewur) which is possibly in the vicinity.

"Ajmer is the head-quarters of the 2nd Battalion, Bombay, Baroda and Central India Railway Volunteer Rifles. The corps originally formed part of the Agra Volunteer Rifle Corps, with the title of Rajputana-Malwa Volunteer Rifle Corps. In 1887 its title was changed to the present designation. It consists of 11 companies, including a cadet company at Mount Abu. Its strength in 1903 stood at 344".[3]

Ajmer, and Jamalpur workshops manufactured more than 500 broad and narrow gauge steam locomotives between 1895 and 1920. [4]

There was a large railway colony, with a hospital at Ajmer. It was one of those railway colonies along the Bombay, Baroda and Central India Railway whose Railway Institute dances were so well regarded that people would travel for up to six hours by train to attend.[5] 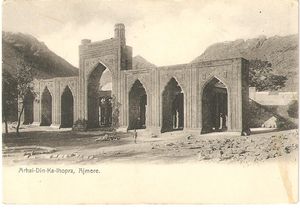