Difference between revisions of "Attock Bridge" 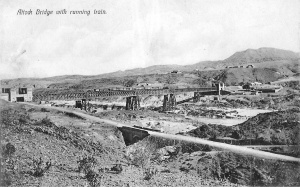 The Attock Bridge is situated between Attock Khurd and Khairabad Kund on Indus river (now in Pakistan.) It is now commonly known as "Old Attock Bridge". This bridge is one of the most important strategic and commercial crossing on the Indus River about 50 miles(80km) south east of Peshawar and between the Punjab and Khyber, hence was heavily fortified. The bridge was opened in 1883 as part of the Punjab Northern State Railway(PNSR) which became North Western State Railway in 1886.

Bridge Proposals 1853. The crossing at Attock was considered very important for military strategic reasons. In 1853, Lieut. W A Crommelin, from the Public Works Department [1]. proposed two designs, both which made use of suspension bridges to cross the Indus. These proposals were not adopted [2].

Bridge of Boats. However a bridge of boats was used for winter with ferry boats for summer and a light rowing boat for daak (postal services) [2]

Tunnel Proposal 1859 In 1859, Colonel Robertson proposed the idea of a tunnel and following is an extract from his report [2]:

The dimensions I propose for the tunnel inside are twenty-four feet wide by twenty feet in height, and a lining under the river of brick masonry two feet thick. This places foundation level of the roadway 82 feet under the low water level, and placing the entrances one hundred feet above this level for safety, we have 182 feet to descend and ascend. The grade I propose is 1 in 20; this is rather steep for railway traffic but offers no difficulties for normal road traffic. The width of the river bed at the point I have selected for the tunnel is 1215 feet.

Work started in 1860 but due to water leakage, machinery breakdowns and over expenditure the construction was stopped and project abandoned in 1862 [2] when the two tunnels were only 258 feet(79 metres) apart [3].

The Consultant Engineer in London was Sir Guildford Lindsey Molesworth [4]. He was the Consulting Engineer to the Indian State Railways [5] and supervised the provision of ironwork supplied by Westwood, Baillie and Co. of London [6].

The Chief Engineer was Francis Langford O'Callaghan [7]. (see note) from the State Railways who, from 1879 to 1863, was in charge of the construction of the PNSR line from Rawalpindi to Peshawar, which included the Attock Bridge. Another Engineer is mentioned, a Mr. Johnson [2] (not identified). The cost of construction was more than Rs 3.2 millions [8] and was opened to traffic on 24 May 1883 [4].

Note: there are incorrect statements in both Wikipedia and Grace's Guide.

Bridge Reconstruction 1926-29 The bridge was reconstructed between 1926-1929 by replacing the longer spans. The trusses were also extended for two sections of the bridge, at the cost of Rs 2.5 millions. The bridge has 2 levels and 5 spans. Three spans are 257 feet long and two are 312 feet long. The upper level is use for railway traffic and lower level was used for road traffic. The approaches to the bridge were built as solid fortifications - as a defense against raids from nearby Pashtun tribesmen. This bridge was a part of famous Grand Trunk Road [4].

Road Bridge 1979 In 1979 a new bridge was constructed and road traffic was shifted to there. This new bridge is known as "New Attock Bridge". Attock Bridge is still in use for railway traffic [4].