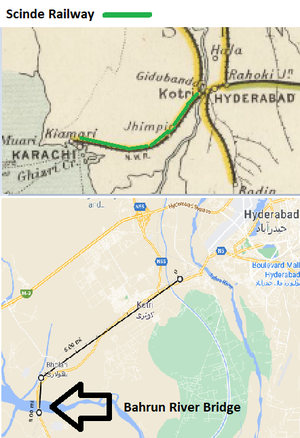 The Bahrun Valley Viaduct was the longest bridge on the 'Karachi-Kotri Section' and is a viaduct across the Bahrun River. Construction on this bridge by the ‘Scinde Railway ’ was started on 5 March 1859 and completed on 26 January 1861 [1].

Kotri is on the west bank of the Indus River, facing Hyderabad on the east bank. The bridge over the Bahrun River (now called the Baran River) is 7 miles(11km) south west from Kotri