The FIBIwiki contains lots of guidance for starting out on your British India research. It is recommended that you read through this page before contacting FIBIS for personal research services (Members) or research advice (non-Members).

The main focus of FIBIS activities is the ‘sub-continent’ of India but the society is also interested in all areas and activities of the British in South Asia including the following between the founding of the East India Company in 1599 to ‘Indian Independence’ in 1947: 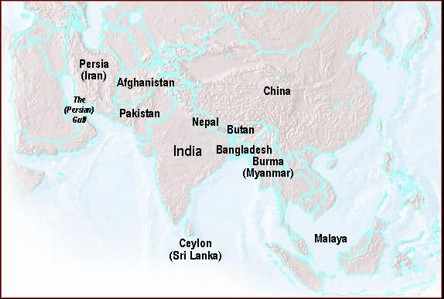 Administrative areas of India in the 1930s

The main cities of the Presidencies were Bombay, Calcutta and Madras, respectively.

Knowing which Presidency a town or city was in, is important when consulting many of the India Office Records held at the British Library.

Recommended steps for your research

There are three free websites:

The commercial site findmypast and the free Familysearch web site host a large volume of transcriptions based on the India Office church records housed at the British Library.
Note: Only findmypast contains images of the records, which generally contain additional information to the transcriptions, such as occupational details, which may be very helpful for your research.
Some later records for baptisms and marriages are not available with full details for privacy reasons on findmypast. For those unable to visit the British Library, alternative records are available for later births and marriages on FamilySearch digitised microfilms, and previously issued microfilms, see FamilySearch and FamilySearch Centres. If FamilySearch Centres are not geographically convenient, copies of records may be requested from the British Library for a fee.