Benares was the headquarters of Benares District in the Benares Division of United Provinces during the British period. It had a cantonment with a British and Native garrison. 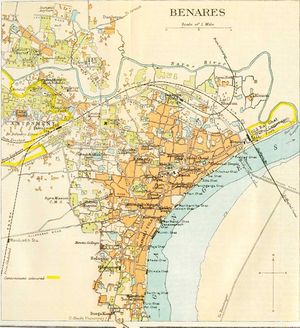 Varanasi, the Holy City of the Hindus, has an ancient history being one of the oldest continuously populated sites in the world. On the left bank of the Ganges, it is an important site of Hindu pilgrimage and is characterised by the burning ghats along the river. After a period of Muslim rule, Varanasi came under the patronage of the Marathas and subsequently was ceded to British control in 1775.

Mutiny at Benares in 1857 during the Indian Mutiny.

It was the first station on the Oudh and Rohilkhand Railway, after the latter's easternmost connection with the East Indian Railway at Moghal Sarai, as well as a terminus for the Bengal and North-Western Railway.