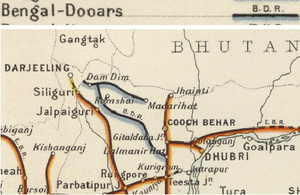 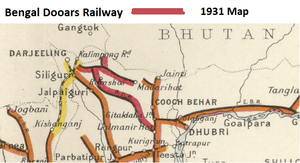 The lines were constructed for the opening of the Western Dooars and for the development of the tea industry [2].

Confusingly, the later lines are listed separately as the Bengal Dooars Extensions Railway in railway statistics, although they form an integral part of its system; these being State funded extensions and passed to BDR on completion [3].

The Company was formed in the UK in 1891 and the main contract signed in the same year. The longest line ran from Lalmanir Hat in Rangpur District north west through Cooch Behar and Jalpaiguri Districts to the Western Dooars on the borders of Bhutan. The line's headquarters were at Domohani.

The undertaking was amalgamated with the Eastern Bengal State Railway in January 1941.

An on-line search of the IOR records relating to this railway [5] gives 18 references. The most important being:-

Staff records have not been found.