Difference between revisions of "Bengal and North-Western Railway"

The ‘Bengal and North Western Railway Company ‘came into being in October 1882 as a result of an agreement made with the Secretary of State for India. The government had started work in 1881 on constructing a rail link between Patna and Bahraich, along the Ghaghara River. The company agreed to complete the construction works and, in consideration of that investment, the government would provide a tranche of land without charge (instead of providing a guaranteed return). Once constructed the company became responsible for the railway’s operation under the concession agreement [1]

The B&NWR was unusual in that it was one of the very few railways promoted and constructed without Government assistance other than the gift of land, the original contract being signed in 1882.

The B&NWR Agent and Chief Engineer was Alexander Izat from February 1883, 'on loan' from the Public Works Department [2], a post which he held till the 31st May 1904 when he joined the Home Board as Managing Director [3]. An outstanding tribute was paid to Alexander Izat in 1912 - see the Inaugeration of the Izat Bridge

In 1890 the company took over management of the ‘Tirhoot State Railway’(TSR) and managed a number of further lines up until 1943 [4].

On 1 January 1943, the Government of India nationalised the B&NWR and amalgamated it with the Rohilkund and Kumaon Railway and the Lucknow-Bareilly State Railway to form the Oudh and Tirhut Railway which subsequently, in 1952, became part of North Eastern Railway, a zone of Indian Railways. [4] 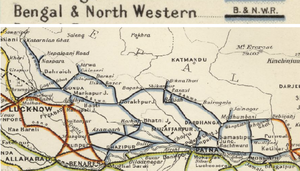 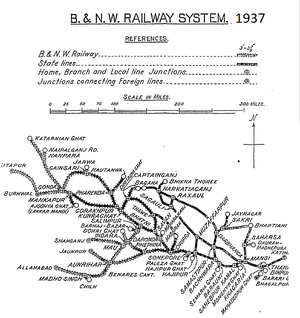 The B&NWR system, (including the ‘Tirhoot State Railway’), eventually comprising a complicated network of lines on the left (north) bank of the Ganges between Katihar in the east and Lucknow in the west . The northernmost of which lies along the Nepal Frontier, whereit is in close touch for a length of about 400 miles. Its southern boundary is for the most part the Ganges, and includes within its area the whole of the trans-Gogra districts with most of Bihar. The lines run through an especially fertile area of land between the Ganges and Gogra rivers known as the Doab. Doab literally means land lying between two confluent rivers. Most of the trade was born by these rivers and the railway has many spur lines to ghats on both rivers

To the east it is bounded by the Eastern Bengal Railway(EBR); on the west by the Rohilkund and Kumaon Railway(R&KR);to the south by the East Indian Railway(EIR) and Oudh and Rohilkhand Railway(O&RR) broad-gauge lines Also links up with the Rajputana-Malwa Railway(RMR) metre-gauge system at Cawnpore.

The B&NWR constructed a number of workshops over the years at Sonpur, Gorakhpur and Samastipur 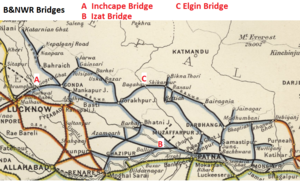 An on-line search of the IOR records relating to this railway [10] gives 81 references. The most important being:-

India Office Records. There are no staff lists or personnel records for the B&NWR held at the British Library.

Miscellaneous references have been identified from varied sources:-