Churchgate Station The ‘Bombay, Baroda and Central India Railway’(BB&CIR) first terminal station in Bombay at Grant Road was opened in 1864, it was intended as a temporary station and lasted only six years[1].

The narrow strip of land on the Back Bay side of the island where the line ran along the edge of the sea and the track was frequently flooded by sea water during the monsoon period was obtained by the Government and given to BB&CIR in 1866 to enable them to lay a line to Churchgate and Colaba. This broad gauge(BG) BB&CIR 'Mainline' section opened on 18 Jan 1870. See page ‘Bombay Back Bay Reclamation Scheme‘.

The ‘Churchgate Station, BB&CIR’ was established in 1870 [2]. Just across the road is the ‘BB&CIR Headquarters’ - see below

Accommodation there was limited and another station was opened in 1893 at Wodehouse Road on the corner with Kittridge Road. The station building was unpretentious and fitted only with bare necessities.
With the quadrupling of the line from between Borivli and Grant Road, the consequent increase in traffic showed that the track and facilities at Colaba were inadequate – this led to the opening in 1930 of the ‘BB&CIR Central Station’ - see separate page 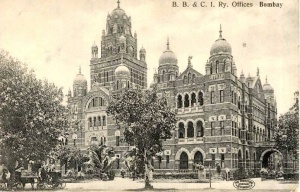 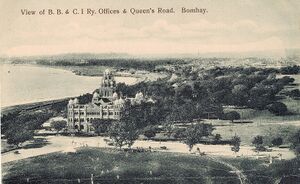 The construction of the head quarters office of the ‘Bombay, Baroda and Central India Railway’(BB&CIR) at Churchgate, Bombay was started in May 1884 under the supervision of Mr Frederick William Stevens, (who had also been the architect of the ‘Bombay Victoria Terminus’ for the ‘Great Indian Peninsula Railway’(GIPR). The building took four years and eight months and was completed at a remarkably moderate cost of Rs. Seven lacs only.

The frontage of this beautiful structure, west ward overlooking the sea had an expanse of 276 feet and its Central dome was 160 feet high. Although one six in size compared to the massive structure of ‘Victoria Terminus’ complex, proximity to Arabian sea, elegant design and internal decoration make it the second most beautiful building in the city of Bombay. The architectural styles used in building this structure are Venetian Gothic and Indian Saracenic. The styles have been harmonized with the climate of Bombay, the local environment and the sea front. The main attraction of this building is the central dome the base of which is adorned by an exquisite female image with two beautiful children standing on either side. This statue of Engineering has a railway locomotive in one hand and a wheel in the other, symbolizing technical progress and is reminiscent of the statue of progress in the V.T. building. The interior of Church gate building has exquisite murals depicting nature – its flora and fauna. Floral tiles with contrasting colours also add beauty to the interior [3].