Calcutta (present day Kolkata) is a large city in north-east India. Calcutta was the headquarters of the Government of the Bengal Presidency. It was also the capital of British India until Delhi became the capital on 12th December 1911. The city had a large European mercantile community. 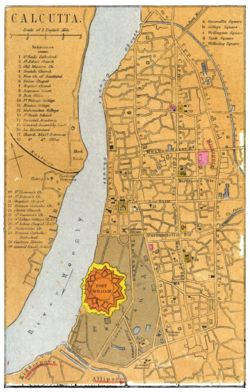 The site of Fort William, the Maidan was (and still is) the centre of Calcutta. It was bounded on the west side by the Hooghly River and the Strand Road, and on the east side by Chowringhi Road. Government House, the Governor's residence, was at the north end of the Maidan and Belvedere, the residence of the Lieutenant-Governor of Bengal, was near the southern end.

The Eden Gardens were started by Lord Auckland's sisters and are beautifully laid out. They were the main gathering place of Calcutta Society in the time of the British Raj. They are also the home of India's oldest cricket ground, the Calcutta Cricket Club, and have a lake which was the home of the Calcutta Rowing Club. Beside the lake is a Burmese Pagoda brought from Prome and set up in 1856. There were many statues in the Gardens. Calcutta Eden Gardens Links to a postcard of Eden Gardens in the Fibiwiki images collection

Images of Churches can be found in FIBIS Gallery, FIBIS Database and Fibiwiki 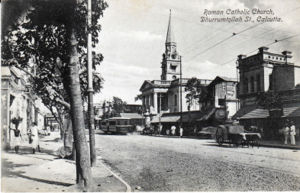 "Non-Christians in church flock" April 15, 2006. telegraphindia.com, now an archived webpage. Article about Our Lady of Dolours.

As well as the temples and mosques that served the general Indian populace, Calcutta also housed:

See Cemeteries in Calcutta. There is also information about the crematorium. 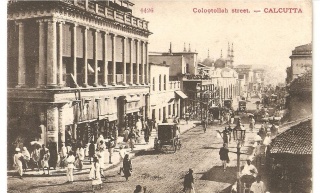 See Directories online for links to many directories with information on Calcutta.

Calcutta 1947. Photographs, at least some of which appear to come from the above album, on flickr.com.

List of Europeans and others in the English factories in Bengal at the time of the Siege of Calcutta in the year 1756 by S Charles Hill 1902 Archive.org.

The Ritchies in India; extracts from the correspondence of William Ritchie, 1817-1862; and personal reminiscences of Gerald Ritchie compiled and edited by Gerald Ritchie 1920 Archive.org. William Ritchie was of the Calcutta Bar and Inner Temple, Member of the Council of the Governor-general, appointed Advocate-General c 1856 and twenty years resident in Calcutta, who died March 22, 1862, age 45. His mother was a Thackeray. Gerald Ritchie was a Bengal Civilian 1875-1901.

Some Account of Endowments and Institutions in connection with the Diocese and Archdeaconry of Calcutta by John H. Pratt, M. A., Archdeacon of Calcutta 1865. Archive.org, mirror from Central Secretariat Library, Government of India. Catalogue title includes Inntitution. Includes details of some schools in other areas.

Official report on the medical topography and climate of Calcutta : with brief notices of its prevalent diseases, endemic and epidemic by James Ranald Martin, Presidency Surgeon 1839 Archive.org

Portrait Sketches of the public characters of Calcutta, published in the "India Review", "India Medical"... from 1838 to 1850 by Colesworthey Grant. Catalogued 1863, but possibly earlier. Text followed by the Portrait Sketches. HathiTrust Digital Library. (2nd part of book file is Sketches of Oriental Heads by Colesworthey Grant). Text only Archive.org
The names have been transcribed for a FIBIS Database

Indian Dust Devils by Major H Hobbs 1937 Archive.org. Reminiscences of a time 40 or 50 years earlier.
Some other, but not all, publications by this author, published in Calcutta, are available at the British Library. Author details in photograph description from Canmore, Historic Environment Scotland.