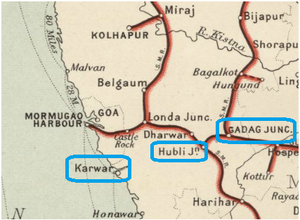 The ‘Annual Report on Railways in India, 1871-72’ [1] lists the ‘Carwar and Hooblee Railway’ as a railway ‘being constructed by the Government without the intervention of companies’ as a metre gauge(MG) with a line length of 144 miles (232km).

“Carwar and Hooblee Railway, to Gudduck. Repeated surveys have been made of this line, and the difficulties, while still serious, are less than they were first expected to be, but the question of its construction is still under consideration. The railway reaches the top of the Ghats, at a level of 2,200 feet (670mtr) above the sea by works extending over 24 miles(38km) ... with a continuous incline, 4 miles(6.4km) in length, of 1 in 40 ...”

“Karwar is the only safe harbour between Bombay and Cochin during all seasons of the year. A proposal was strenuously urged to connect Karwar by a railway with the interior, so as to provide a seaport for the southern cotton Districts. Between 1867 and 1874 the hope that a railway from Karwar to Hubli would be sanctioned raised the value of building sites at Karwar, and led to the construction of many warehouses and dwellings. The scheme was finally abandoned in favour of the line through Portugese territory to Marmagoa. The trade of Karwar has markedly decreased since the opening of this railway.”

This alternative line eventually opened in 1888 and named the ‘West of India Portuguese Railway’, after several delays and negotiations and delay see separate pages

The Karwar to Hubli section was not constructed

The Hubli to Gadag section opened in July 1885 as part of the ‘Southern Mahratta Railway Mainline Dharwar-Hospet Section’ [4].

In the event none of these proposals were adopted.