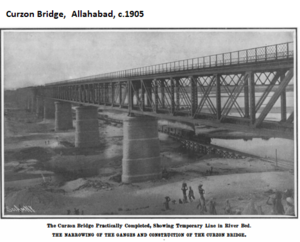 Curzon Bridge, Allahabad
Illustration from Archive.org Scientific American Vol 99, Number 13, September 1908 “The narrowing of the Ganges and construction of the Curzon Bridge", page 204, pdf page 4 of 16

Curzon Bridge, Allahabad
The Curzon Bridge over the river Ganges formed part of the Allahabad-Fyzabad Railway. The bridge opened to rail traffic on 15 Jun in 1905, operated by the Oudh and Rohilkhand Railway, and providing a direct link from Allahabad to Lucknow and the hill stations beyond . The roadway opened for cart-traffic on 20 Dec 1905 [1].

The bridge was named after the Viceroy of that time Lord Curzon, Viceroy of India 1899-1905.

The bridge required special civil engineering techniques, first developed by James Richard Bell of the Public Works Department in the building of the Chenab Bridge at Shershar in the years 1888-90. The construction technique is described in the Scientific American “The narrowing of the Ganges and construction of the Curzon Bridge" article Sept.1908 [2]. 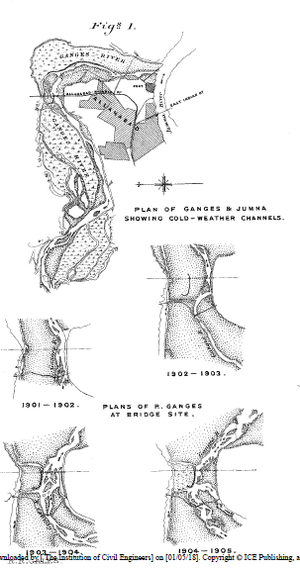 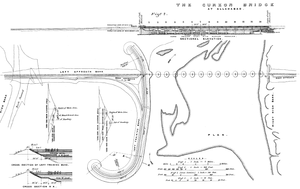 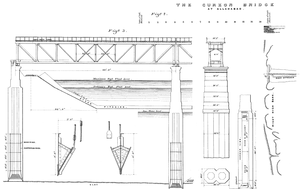 General Description: Construction was sanctioned in December 1901 for the bridge as part of the State Railway and consisted of fifteen spans of 200 feet(61m) with well foundations. The bridge carried a single broad gauge (BG) line between the girders and a roadway on top. The Engineer-in-Charge was Robert Richard Gales; the author of the Paper delivered to the Institution of Civil Engineers, London [4].

Location and Practical Considerations: The ‘Curzon Bridge’ crosses the Ganges at about 5 miles(8km) from the junction of the East Indian Railway and about 7 miles(11km) above the junction of the Jumna with the Ganges. At this location the Ganges is confined between high clay banks, which are practically insrodible owing to the hardness of the clay and the presence of kunkur reefs [5].

River Training Bunds: The extensive training bunds were designed taking into account the local conditions and the earlier bridge works at Sher Shar (1888-90) and Ferozepur (1885-87) and the Koshi bridges. Construction was actually started in Jan 1902 [6].

Wells and Well-sinking: 15 double-octagonal wells were required and well sinking commenced as soon as the water fell sufficiently construction commenced on Piers 1,2 and 3, by the month of Feb 1903 all 15 wells were being built on, and 14 had been sunk. The top 10 feet of the wells were built in cement mortar, the intermediate shaft generally in pure kunkur lime, the wells were built of brick except Nos. 10,11,12, 14 and the right abutments, which were built of coarse rubble stone. Technical and geological difficulties were encountered on some of the wells, notably No. 6 and one year elaspsed from the time the well masonry was finished and the well sinking was completed. At the end of the first working-season (29 Jun 1903), a ring of stone 4 feet thick and 30feet wide was created 20 feet from the well . Well construction continued in the 1903-04 season [7].

Pier Construction: Piers were founded on the tops of the wells at a depth of 2 feet below the lowest water level recorded. The piers were built of white sandstone from the Jubal quarries, with a hearting of purple sandstone from the Birohe quarries in the case of piers Nos. 8 to 14. The top of the pier was finished off by a string-course and cornice of Irzapore sone and a bed cap of Shiurajpur stone mortar [8].

Girders: The girders were 200 feet(61 mtr) in clear span of single triangulation ‘N’ type; the length of the bays was 25 feet 9 inches (7.85 mtr). The weight of steelwork in one span, including the roadway flooring, was 320 tons. The spans were erected with one fixed and one rolling end on each pier. Thje girders were designed by the consulting engineers to the India Office (Sir A Rendel & Co) and were made in England under their supervision. [9]

Roadway: The Government of the United Provinces of Agra and Oudh desired a roadway of a metalled road 15 feet(4.6 mtr) in width and two timber footpaths each 4 feet 1 inch (1.25mtr) in width. The roadway was carried from the approach banks onto the top booms by steel viaducts, designed by the author, Robert Richard Gales [11]

The following are recorded as being responsible during the construction [12]:-

At some point in time (not determined ) the use of the bridge for rail and road traffic was abandoned, leaving it only open to two wheelers and pedestrians. It is reported that the bridge was due to be demolished but is to be handed over to the Uttar Pradesh Government for restoration as a tourist attraction [14].