Darjeeling was a hill station in Bengal.

There were military cantonments at Jalapahar (alternative spelling Jellapahar) (established 1848), Darjeeling and at Lebong, situated below Darjeeling about eight miles away. Lebong cantonment was established in 1882 as part of the Jalapahar cantonment, and became a separate cantonment in 1895.[1] There were artillery barracks at Katapahar, above Darjeeling and it appears that this was what was called the Darjeeling cantonment. The term "Darjeeling cantonment" seems at times to have also included Jalapahar, which was a convalescent depot.
Senchal was a station five miles from Darjeeling, at an elevation of about 8,600 feet.
Takdah 16 miles south east of Darjeeling by motor road was in use as a cantonment for two Gurkha battalions 1910 to 1926, when it was closed due to unsuitable climatic conditions.[2] In 1915 it was the Depot for 2nd 10th Gurkha Rifles[3] and in January 1919 was listed as a Place of Internment/Prisoner of War Camp.

The above publication is now also available as part of a pdf publication Burials In Assam & N.E. India 1793-1974 by Eileen Hewson, from Kabristan Archives.

There is advice in the webpage "Darjeeling’s historic graves"[6] that Find a Grave, refer External links below, has entries for several specified Darjeeling cemeteries. 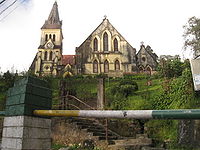 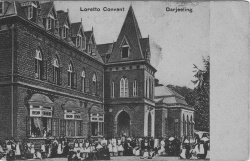 History of St. Paul's School, Darjeeling from the School website.
St. Paul’s was run on the lines of a typical British public school. C 1937 most of the teachers were British, some Anglo-Indians and two Indians. Most of the pupils were Christians, Jews and Armenians, and there were also some Hindus and a few Moslems. Whenever the students went out they wore the school cap and carried an umbrella as it rained quite often in Darjeeling.[7]

Old photographs of Darjeeling from the Das Studio Photo Archives from Ratna D Pradhan’s Himalayan Light: Images of the Himalayas. If you cannot access this link, the archived link provides an indication of the content.

On Top of the World–Five Women Explorers in Tibet by Luree Miller 1976. Link to a pdf download Pahar- Mountains of Central Asia Digital Dataset. If download button does not display, locate under Books/Tibet And China/1976.

A revised 2nd edition, published c 1922 is titled A Concise History of the Darjeeling District since 1835 by E C Dozey Archive.org. The chapter on cemeteries commences page 146. Another file, Archive.org, where images perhaps may be better.