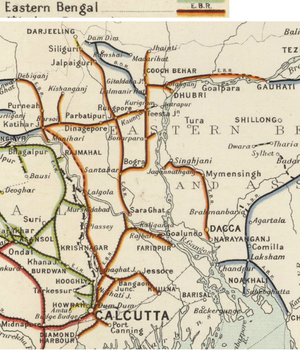 The first construction started in October 1859. Isambard Kingdom Brunel had been engaged in Britain as consulting engineer to the EBR and Bradford Leslie, an English civil engineer who specialised in bridges, was sent to India as engineer in charge of bridges and viaducts. He supervised the building of the Eschamutter(Ichamati) and Koomar(Kumar) river bridges before returning to Britain in 1861. He returned to India in 1865 and became Chief Engineer and Agent [2] [3].

The 'Brassey, Wythes and Paxman Partenership undertook the construction of the EBR a line of 112 miles(179km) from Calcutta to Kooshtea(Kushtia) on the River Ganges. The line opened in stages from Calcutta in 1862 and completed through to Kushtia in 1864.

The “1870-71 Annual Report for Indian Railways for the Eastern Bengal Railway“ gives:- ‘Broad Gauge (BG) Line sanctioned 159 miles(256km), which included 45 miles(72km)of Line opened 1870 with nil to be finished’. The Report also details the ‘progress of the railway and the commercial summery’ - see separate pages for Report details.