From FIBIwiki
Revision as of 15:24, 11 January 2021 by PEA-2292 (talk | contribs) (Created page with "thumb|Howrah Station '''Howrah Railway Station''' was the terminus of the ‘East Indian Railway’ (EIR) from the time of the inaugura...")
(diff) ← Older revision | Latest revision (diff) | Newer revision → (diff)
Jump to navigation Jump to search 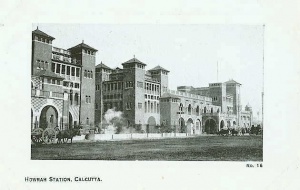 Howrah Railway Station was the terminus of the ‘East Indian Railway’ (EIR) from the time of the inaugural train on 15 Aug 1854. Howrah was connected to Calcutta crossing the Hooghly River first by boat then, from the early 1870’s by the ‘Howrah Floating Bridge’ and finally in 1943 by the ‘Howrah Bridge’ - see separate page

EIR Calcutta Offices The EIR established its administrative office at 29 Theatre Road, Calcutta at the time of Rowland Macdonald Stephenson, the first Agent. The office was shifted to its present location at Fairle Place, Calcutta in 1879 and set up a booking office there. The offices were completed in 1854.

Initial plans for the first ‘Howrah Station’ were submitted by George Turnbull the Chief Engineer of the ‘East Indian Railway Company’ on 17 June 1851. The government authorities, however, were not too keen to acquire as much land as the Railway Company required, taking into account the enormous anticipated growth rate of the proposed rail station. In May 1852 Turnbull resubmitted his station plans complete with details - a major work of him and his team of engineers. In October four tenders were received varying from Rs.190,000 to 274,526 against an estimate of Rs 250,000[2].

So far we know that the old ‘Howrah Station’ building was a spacious columnar structure, which was demolished later during the construction of the new station building. Initially it was a modest structure of red brick with corrugated Iron sheet roof and one platform. Another platform was added in 1865 for arrival departure of trains separately. The third platform was provided in 1895 [1][2]. These were not very long as sometimes as many as 5 coaches extended beyond platform. The coaches were only four wheelers. 8 wheeler coaches were introduced only in 1903. From this description provided in EIR source it appears that the first station building had been constructed not at one go but gradually by phases, and that is why specific dates of foundation, inauguration, or demolition of the old and new buildings have been found so rarely and often overlapping in historical records [3].

In 1900 the ‘Bengal-Nagpur Railway’(BNR) opened the ‘Calcutta Extension Line’ from Sini to Howrah; 171 miles(274km) and the need for a new building became imperative [1]A new station building was proposed in 1901. The new station was designed by the British architect Halsey Ricardo[3].

In 1905 the new ‘Howrah Station’ building, the North Wing of the present station , was constructed with 6 platforms with a provision for adding another 4 platforms in the South Wing in the future. There was a central road between the two wings joining the Buckland Bridge and the entrance to the North Wing was on the road leading to the ‘Howrah-Calcutta Floating Bridge of Boats’. BNR trains were dealt with at the old station until the South Wing was completed [1].

Other Stations in Howrah

The ‘Howrah-Amta Light Railway’ and 'Howrah-Sheakhalla Light Railways start from Telkal Ghat on the Hooghly river,(500mtr south of ‘Howrah Station’) and skirting the Howrah Maidan pass through the crowded Panchanantala road to Kadamtala station where they separate.