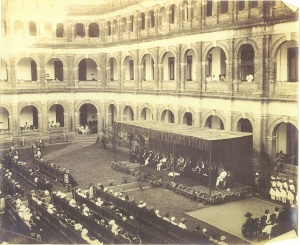 The Indian Civil Service may be abbreviated ICS. Before 1858 it was known as the Honourable East India Company's Civil Service.

The service was a cadre of men appointed to administer India and may also known as the Covenanted Civil Service. Employees were required to pass examinations to University level and signed a covenant or 'bond' of good behaviour to serve the East India Company only, as a condition of appointment. The term 'Indian Civil Service' is also used loosely of the Indian public services in general.

Initially, the Honourable East India Company Civil Servants handled the civil administration of India, they were covenanted to provide a lifetime of service.

Civil service control was transferred to the Indian Government under the Government of India Act of 1858 afterwards new members of the service were contracted for a 10 year term. The creation of the Imperial Civil Service of India was as a result of the 1886–87 Public Service Commission recommendation.

Covenanted service was given by the elite top ranks of the Civil Service who gave a pledge good behaviour. Lower ranks that took Uncovenanted Service were recuited in India, be they English, Indian, or Anglo Indian.

A subcategory of the Indian Civil Service was the Indian Political Service whose members were responsible for the civil administration of frontier districts and also served as British Agents to rulers of Princely States.It also included members of the diplomatic service. Earlier titles were Foreign Department, and Foreign and Political Department.

Members of the Foreign and Political Department were sometimes known as The Twice Born, a progression of the terminology sometimes used in respect of members the Indian Civil Service, The Heaven-Born.[1] 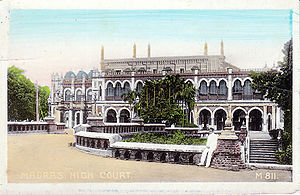 In the Regulated Provinces, those that were the older provinces with a long period of settled administration e.g. Madras, Bombay, the positions (after 1858) were:

In the Unregulated Provinces, Deputy-Commissioners replaced the role of Collector-Magistrate.

Arriving in India in 1830, after 2 years patronage supported training at Hertford (1806-1809) and Haileybury Hertfordshire, England (1809-1858) entrants seeking to gain “Writership” became a student writer at The East India Company's Calcutta College in Fort William. Students were lavishly rewarded with ₤400 a year, and encouraged to borrow heavily to acquire high status and comfortable lifestyle - often enabling them to stable 40 horses; not unexpectedly this was reformed. Reforms still allowed students sufficient finance to keep three horses and a buggy. Club memberships and mess parties continued to allow them to gain social influence in the capital.

In 1856 the system of appointment by patronage was replaced by an open competitive examination. Courses of instruction and language training were then carried out in England. Young men were deemed to be fit for immediate service so no longer socialised in the capital unlike their predecessors. They would rely on local tutors for regional dialects.

Entrance requirements c 1872, page 158 Index Scholasticus: Sons and daughters. A guide to parents in the choice of educational institutions, preparatory to professional or other occupation of their children by R. Kemp Philp 1872 Archive.org

See List of Indian Civil Servants for details of some individuals.

The Bureaucracy in India : an historical analysis of development up to 1947 by B. B. Misra 1977. Archive.org Lending Library.

"‘Our hero is a sportsman’: British domestic interiors in 19th century India" British Library blog “Untold Lives” 05 March 2014. Includes three images by William Tayler from his 1842 publication Sketches Illustrating the Manners & Customs of the Indians and Anglo-Indians, one of which "The Young Lady's Toilet" is also available from another BL blog
18 watercolours by William Tayler Brown University Library on World Digital Library.

Here and There: Memories, Indian and Other by H G Keene 1906 Archive.org.

Macartney’s wife Catherine wrote of her time at Kashgar in An English Lady in Chinese Turkestan first published 1931. Link to a pdf download PAHAR Mountains of Central Asia Digital Dataset.
A later biography is The Diplomat of Kashgar: A Very Special Agent. The Life of Sir George Macartney, 18 January 1867-19 May 1945 by James McCarthy.
Chinese Central Asia by C P Skrine. Indian Civil Service, British Consul General in Chinese Turkistan 1922-1924. First published 1926 Archive.org. Index.Hathi Trust Digital Library version where images are rotatable. The Consulate was at Kashgar. Clarmont Percival Skrine Wikipedia.
Also see Norperforce for more about the Kashgar Mission during WW1 prior to 1922.

A Shaft of Sunlight–Memories of a Varied Life by Philip Mason 1978. Link to a pdf download, PAHAR Mountains of Central Asia Digital Dataset. If the download does not display, located under Books/Indian Subcontinent. Review of the book kirkusreviews.com.
"Philip Mason obituary: Last witness to the Raj" by Hugh Tinker 2 Feb 1999. The Guardian
Listen to the 1978 interview Philip Mason, with transcripts. He talks of his training for the ICS, his work as a court official and map surveyor, and of his life as an author.