Kanlog Cemetery Shimla was visited in October 2012 by Jane and Tony Bennett who provided the following report. 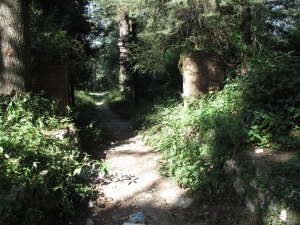 "Kanlog Cemetery is situated on the SE side of the town on a narrow, wooded, steeply sloping ridge. The cemetery is bisected by a new bypass road on which there is a small wooden house and some fruit stalls on a bend. It is difficult to envisage how one gained access to the cemetery originally as the upper part has to be accessed at this central point by scrambling up a steep bank, although access from the top is easier, but more difficult to find. A central path runs through the cemetery (both the upper and lower parts) with space for about 8 graves on each side. Graves close to the path can be identified, where a stone exists, but away from the path the area is heavily overgrown with small trees and thorns. There is a lot of litter, mainly bottles, which indicates that the area is used as a drinking haunt by the locals. You have to be careful where you stand off the path, as it is also used as a lavatory". 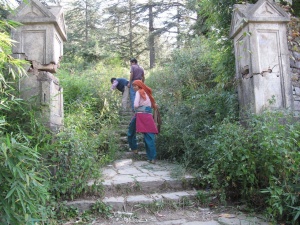 They further advised that the graves in the Upper Portion seemed to be more recent than those in the Lower Portion. These include about 25 graves uncovered by the Commonwealth War Graves Commission (CWGC)

Transcriptions were made of some graves in both the Upper and Lower parts of the cemetery. It is not an exhaustive list, but as much as they could do in the time available without protective clothes to penetrate further.

The Bennetts were assisted in their visit by Sumit Vashist, a local guide, who also hosts a website with information about the area at Shimla Walks

Material kindly supplied by the Bennetts.