The name, Mysore State Railway (MSR), originally referred to the metre gauge(MG) line which connected the State capital, Mysore, to Bangalore and named the Mysore-Bangalore Railway. The MSR also developed a number of other railways which from 1887 were initially leased to the Southern Mahratta Railway (SMR).

Later, the MSR, or Mysore Railway as it was sometimes known in this context, was the name applied to a network of disjointed metre gauge(MG) branch lines owned by the Princely Mysore State Durbar. 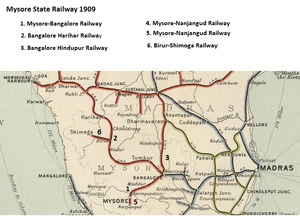 This development is clearly seen on the 1931 Map.

Lines constructed/worked by the Second MSR

An on-line search of the IOR records relating to this railway [10] gives the following: -

Unfortunately, there are no MSR Staff agreements held at the British Library in the India Office Records.
The following have been found from other sources:-

See separate pages as detailed above for further information