The Napier Mole with a light Tramway, Karachi Harbour was constructed in 1854. The tramway road 3 miles (5km) in length from Kiamari, the landing place for passengers and goods destined for Karachi or dispatch up-country . The tramway was constructed by the the North-Western State Railway(NWR) [1] 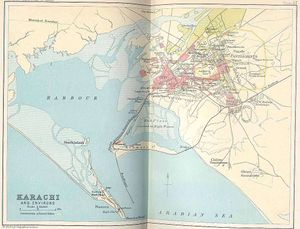 Karachi 1893. The line running south east from Karachi city to Kiamari is the first tramway track, inaugurated in 1894 and became the NWR mainline. The line to the south was the Karachi Tramway, following Kiamari Island, crossing by the ‘bridge’ (shown on map) to the streets of Karachi towship

The broad gauge(BG) line opened 16 Jun 1889 and became classified as the 'Karachi City to Kiamari (including Napier Mole)' section of the NWR mainline, a length of 3.07 miles(5km) [2]

The small fishing village of Karachi became a trading post when the Talpur Mirs of Sindh built a mud fort here in the 18th century, but the port remained small. It was completely transformed when its harbour was developed by the British after they conquered Sindh in the mid-19th century. A city rapidly grew and the British began several projects in 1854 so that the port took shape. The main navigable channel was dredged and the construction of a mole or causeway joining the main harbour with the rest of the city was undertaken. The Napier Mole Bridge was constructed about five years later [3]

With the connection to the NWR mainline the busy port included the Merewether Pier , called after a former Commissioner in Sind, the foundation stone of which was laid by Lord Ripon in 1880; with the Erskine Wharf, the James Wharf an oil pier , store, customs house etc [1]. The level of activity can be seen in the photograph c.1900 [4]