Difference between revisions of "POW Camps in India" 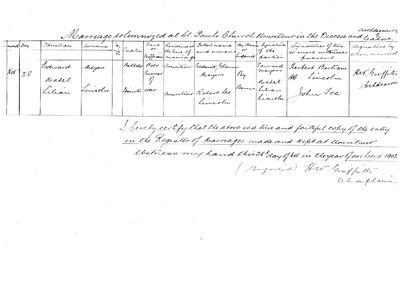 The marriage of Edward Meyers, Boer Prisoner of War took place on 28 November 1902 at Amritsar

Prisoner of War and Internment Camps in India

Until April 1901 the British captured approx 25,000 Boers. Of these various numbers were sent to various places as POWs. Only a total of 9000 Boer POWs were ever sent out to India of this number, and they were held in some 14-15 camps in selected Indian cantonments. A ten year old boy was known to be a prisoner in India.[1]

In India, there were Boer prisoners of war camps at

Also see the Fibiwiki page Ceylon for additional information about POWs in Ceylon.

The original report (in French) appears to contain some additional information, such as the location of camps, and more details of the types of prisoners. (From the website "Prisoners of the First World War-ICRC Historical Archives")

The Prisoners-of-war were interned in India in 29 camps forming 6 Groups of camps. In addition, there were two Civil Internment Camps at Dehradun and Deoli and one camp in Delhi for the Japanese prisoners captured in Burma.

Some 18,400 Italian prisoners of war (out of 50,000 requested by the Australian Government, to be employed as farm labourers) were transported from India to Australia from 1943. Some of the [Italian?] POWs in India were shipped to South Africa to help build the railway there.[10][11][12]

The above information is mainly taken from the website Indian Banknote:India: Prisoner-of-War Coupons (archive.org link).

There was an internment camp at Mhow for Germans residing in India.[14]