Rail gauge, sometimes track gauge, is the distance between the inner sides of the two parallel rails that make up a single railway line. Sixty percent of the world's railways use a standard gauge of 1,435 mm (4 ft 8+1⁄2 in). Wider gauges are called broad gauge; smaller gauges, narrow gauge. Break-of-gauge refers to a place where different gauges meet; sometimes this may involve transhipment and there may be extensive sheds to facilitate this. Some stretches of track are dual or mixed gauge, with three (or sometimes four) rails in place of the usual two, to allow trains of two or more different gauges to share the same path. Gauge conversion can be used to reduce break-of-gauge situations. 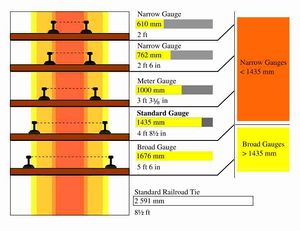 The first gauge used in India was one of 5' 6" (1676mm), settled upon in the belief that it offered greater stability in the face of Indian weather and the perceived threat of cyclonic winds, and offered economies in freight haulage. In 1868, a decision was taken to permit the introduction of a smaller gauge in order to increase quickly the construction of railways in India. Later, two even narrower gauges (2' and 2' 6") were allowed to be used for feeder lines.

Following the introduction of the metre gauge, the GOI occasionally allowed existing broad gauge lines to be converted to metre gauge and vice versa where expedient. Despite four Commissions of Inquiry, the GOI did little te resolve the continuing problem of transhipment wherever there was a break-of-gauge.