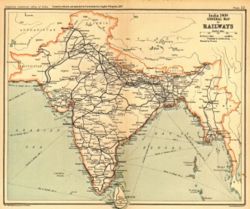 General map of railways in India as of 1909

The railways in India were subject to constant changes of ownership, amalgamations and adjustments over the years. The categorisation below is intended to be comprehensive but not exhaustive.

The early railway companies were UK companies operating in India. Later the British Government of India (GOI) owned the majority and either managed them directly or leased them back to private management. From circa 1925 the GOI began to call in the leases, operating the services directly. By 1945, most railways were both owned and managed by the GOI.

For a full list of railways known to have operated in British India, follow the link below.

In 1947, the year of Independence, there were 42 operational railway systems in what had been British India but the most immediate practical consideration of partition was the division of several systems to form what then became Indian Railways and Pakistan Railways; later still, the latter was to suffer further upheaval on the formation of Bangladesh Railway.

It is important to bear in mind that railway staff records created in India before 1947 remain in India, as do the records of railways built, owned or operated by the Indian Princely States. The records that survive today in the collections held at the British Library (and elsewhere) do so because they were originally created in the UK.

Collections of railway records are generally by railway company so it is a good idea to know which railway company an ancestor worked for. In addition, very few collections of railway records are indexed so it is also a good idea to know the trade or employment followed on the railway as occupations were often grouped together when published in staff lists and registers. Even in Thacker's, this will be found to be the case in the individual railway company entries. More information about railway occupations can be found in Fibiwiki article railway worker.

Anglo-Indians became closely identified with the running of the railways. By 1905, forming less than ½% of India's total population, they provided 2% of railway employees. Eventually more than 50% of all Anglo-Indian families came to be supported by railway employment either directly or as a dependant of a railway employee.

Available to FIBIS members only

Railway Department History of Indian Railways 1951. Archive.org version, mirror from Digital Library of India. Title as catalogued, appears to be a similar report to that immediately above. Poor quality digital file.