In 1920, twelve Armoured Car Companies were set up as part of the Tank Corps, (later Royal Tank Corps), absorbing units from the Machine Gun Corps; eight were later converted into independent Light Tank Companies. All disbanded before the outbreak of the Second World War. [1]

By 1936 most armoured cars in service in India had been replaced by light tanks and the cars were distributed to volunteer forces in India and neighbouring countries.[2] 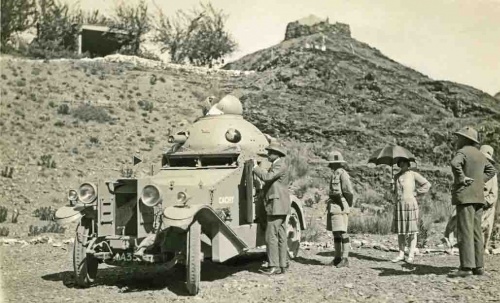 Findmypast now has the database "Royal Tank Corps Enlistment Records, 1919-1934" (released in December 2013), located in Armed Forces & Conflict/Regimental & Service Records. These records are available with Britain Full and World Subscriptions, or credits may be purchased. Searching is free, and you can search by keyword (a name is not compulsory) [4]

These records are for other ranks soldiers. No officers are included.
The records cover men who enlisted between 1919 and 1934. The enlistments are either: transfers from the Dragoons, Hussars, Lancers or Machine Gun Corps, direct enlistments and re-enlistments.
The records usually include a combination of the following information

In the operation from Shabkadar (North West Frontier) on 8 October 1915 "armoured cars were used for the first time in action in India and proved of great value".[9]

"Armoured Motor Units began to form in Spring of 1915 utilising vehicles donated by rich Indians and Europeans. This was overseen by Colonel Lord Montagu (Inspector of Motor Vehicles, India and later Brigadier General, Advisor on Mechanical Transport Services, India). Only No 1 AMU had reliable vehicles - three Rolls Royces which, like the other cars were armour-plated by Indian Railway Workshops, and this unit acted as a Brigade HQ for Nos 1, 2 & 3 AMUs. Most of the other vehicles were unsuitable and it was not until 1918 that improved cars were made available.

The Units were re-designated Armoured Motor Batteries in 1917 and during this period, British and Indian crews were gradually replaced by MGC personnel. The British crews had originally been provided by Territorials from garrisons in India. By 1919, Nos 2 & 3 Armoured Motor Brigades were formed from Nos 4 - 12 AMBs, whilst Nos 13 - 16 AMBs remained un-brigaded. At the commencement of the 3rd Afghan War, No 1 Armoured Motor Brigade was reorganised into five Regular and three Auxiliary AMBs which served in the Khyber and Chitral areas. HQ No 10 Armoured Motor Brigade, formed in the UK, commanded Nos 5, 6, 7 & 16 AMBs and operated in Waziristan and Mahsud".[10]

The following War Diaries are available at the National Archives, Kew

Note in India, the units were known as Armoured Motor Batteries (AMB)

The Bill Green collection of medals, in 2004 contained the following medals awarded to members of the Tank Corps. Generally details of the Company were not given. Being from one collection only, the list may not be exhaustive [16]

A LAMB soldier in Mesopotamia wore a sun helmet with a flash/badge showing a lamb.[21]

Note: No. 2 Section 8th Armoured Car Company may have operated independently, as it appears it was on the North West Frontier in 1931, not in Delhi.

The Company were operating on both the Takki Zam Line and in the Tochi Valley, and were daily in active patrols with the picqueting infantry. Two noteworthy events happened.

1) March 1922 at Idak a pigeon carried by the cars reported an ambush, flying five miles in five minutes.

Later in year the Company was in action against a raiding party at Hinnis Tangai Ridge.

In July 1923 six cars moved 140 miles in 17 1/12 hours taking part in the surrounding of the Hisa Mahal Nabha State. The Maharaja received an ultimatum and soon afterwards was dethroned. Colonel K Wigram congratulated the cars on their performance. [52]

The Tank Corps Journal, first published 1919-1920. The title changed in 1923 to The Royal Tank Corps Journal. There were twelve monthly journals each year, for a total of about 350 pages. "Every conceivable aspect of the corp to date is covered, every unit is covered in each volume including the armoured car battalions".[59]

Several articles on the campaigns in Waziristan 1921-24 were published in the Tank Corps Journal in the early 1920s.[64]

An article "Tanks in India" by General Sir John Crocker appeared in the Royal Tank Corps Journal of July 1925.[65]

After the First World War, the British Army in India had a requirement for Armoured Cars for areas such as the North West frontier. A delegation was despatched to Britain to see what was on offer and particularly to look at the offerings from Rolls-Royce as their wartime models had performed well. As well as being expensive they surprisingly were unable to get over the gradient test on the cross country trial. There was also at the trials a 1 1/2 ton Crossley based on the chassis that had been intended for a Russian contract that came to nothing because of the Revolution. This was the chassis that was under consideration as a medium truck for India and eventually became the IGL1. It sailed through the trials. An order for 32 followed with bodies by Vickers and these were designated IGA1 by Crossley. These were delivered in 1923 and a further order followed. Total deliveries were about 450. All of these vehicles were fitted with solid tyres presumably to remove the risk of punctures but these were never very successful when used off road as their narrow profile inevitably led to the vehicle sinking up to its axles.[70]

Crossley armoured cars did not prove popular with their crews who found them underpowered and underbraked due to the weight of the armoured body. Brakes were fitted to the rear wheels only which made handling these cars on the mountainous roads of the North-West Frontier of India a tricky business.[71]

In 1933 Crossley armoured cars had solid tyres to avoid punctures. This had made them very rough to ride in, and caused them to be very prone to turning over. These cars operated in Peshawar at this time in a campaign against the Red Shirts. Several of the cars were trapped in the streets by rioters, and at least one was burned out. A system was installed inside the cars that electrified the hulls so that rioters couldn't climb on top of the cars. There were a few 6 wheeled armoured cars with the same Crossley turret… Very few photos of these cars survive.

Although it is not certain in all cases, at this time following a precedent started in World War I, the names on tanks tend to denote the battalion, so any car name starting with C is likely to have been on a car in the 3rd Battalion, or third company of the Royal Tank Corps.

There were ... about 100 of these armoured cars. They rotated to the NWFP for about 6 months each in turn.[7].