Difference between revisions of "Scinde Railway"

The Scinde Railway Company was first established by deed of settlement in March 1855 and incorporated by the ‘Scinde Railway Act’ of Parliament in July 1855 after which a contract was entered with the East India Company in December 1855.

The Company had been invited to tender in 1855 by the Government of India to build a railway from Kararchee(Karachi) to Hyderabad, to be called the Scinde Railway [1], this being a distance of about 120 miles(192km). The company contracted with the Government of India (GoI) to construct the initial section from Karachi to Kotri. The company was granted a 5% return on investment up to a maximum of £1 million in order to build the ‘120 mile’ line [2].

The London based Robert Stephenson, Consultant Engineer was approached by the 'Scinde Railway Company' for advice and in 1857 recommended John Brunton as Chief Engineer. Following Stephenson’s death in 1859 George Bidder was appointed as the Scinde Railway Consulting Engineer in London [3].

The Scinde Railway was one part of a communication link developed by the 'Scinde Railway Company' constructed primarily to reduce the journey time on the final stage of long haul from Britain to Delhi and Calcutta. The line from Karachi to Kotri could move cargo and passengers to Kotri instead of Karachi, saving approx 250km of circuitous journey through Indus River delta. At Kotri the line linked to the ’Indus Flotilla’ Company steamers, also owned by the ‘Scinde Railway Company’ which operated upstream to Multan [4]. From Multan the ‘Punjaub Railway ’ ran to Amritsar where it became the ‘Delhi Railway’, both owned by the Scinde Railway Company, connected to the East Indian Railway at Ghaziabad (just east of Delhi), thus providing a connection between Karachi and Delhi and onward to Calcutta. 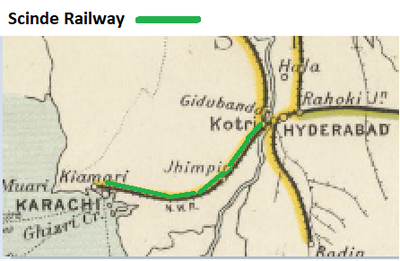 The work commenced in April 1858 to construct the broad gauge(BG) single track railway [5] and on 13 May 1861 succeeded in connecting the port town of Karachi to Kotri on the Indus River, the first railway line for public traffic between these towns [6].

The challenges faced during the construction were considerable as described in the article ‘The Line and Works of the Scinde Railway’ by John Brunton, Institution of Civil Engineers, 1862-63 [7].
Particular reference is given to the earthworks , a viaduct and considerable number of bridges required to be built:-

An on-line search of the India Office Records (IOR) records held at the British Library relating to this railway [8] gives the following:-

Construction Staff - Other staff of the Scinde Railway involved during the construction are acknowledged:-