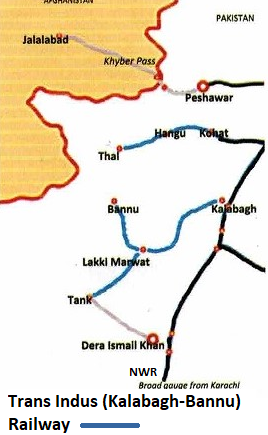 The line initially ran from Kalabagh where there was a ferry over the Indus River (which was replaced by a bridge in 1931) to Bannu at the head of the Tochi Valley, which was the main route from India into Afghanistan. Construction of the line had commenced by 1911 using equipment on loan from the Light Military Reserve Railway - see separate page for information [1].

In 1913 locomotives were purchased from the Kalka-Simla Railway for further construction work:-