The Agra Canal was an irrigation canal constructed from Delhi to Agra between 1869 and 1874. The building of the headworks from the Yamuna River at Okhla was undertaken by the North-Western Provinces Public Works Department [1].

The Agra canal originates from Okhla barrage, downstream of Nizamuddin bridge. The Canal receives its water from the Yamuna River at Okhla, about 6.5 miles (10km) to the south of New Delhi. The weir across the Yamuna was constructed of locally quarried stone. It was about 800-yard (730m) long, and rises seven-feet (2.1m) above the summer level of the river [2]. 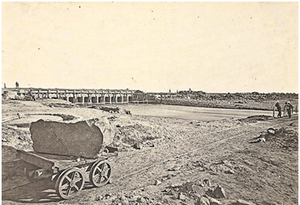 The records show that a 4 ft 8 1⁄2 in (1,435 mm) standard gauge (SG) tramway was in use to carry stone for the construction. This Gauge was exceptional in India and the records show the probable source of the two SG locomotives despatched from UK in October 1866 and the supply of SG stone wagons in 1871 [1].

The extent of the line and the fate of the locomotives and wagons is not known.

The print, from the British Library in the public domain and on Wikipedia [2], shows the railway carts. It does not show the means of propulsion to either animal or mechanical .