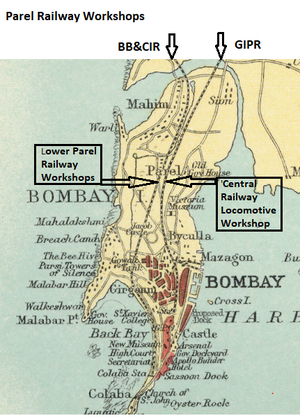 Parel, originally a separate island, one of the Seven Islands of Bombay [1]. In later times Parel was the favourite quarter of the European inhabitants and contained the official residence of the Governor of Bombay( subsequently moving to Malabar Point [2].

Central Railway Locomotive Workshop, Parel was set up by Great Indian Peninsula Railway(GIPR) as a Steam Loco Shed in 1879 for broad gauge(BG). It is one of the largest and oldest repair Workshops on the Indian Railways with diversified repair/manufacturing activities [3].

Lower Parel Railway Workshops. The workshop was originally a Locomotive repair workshop during the British period and opened between the year 1870-76. The workshop was set up by the former Bombay, Baroda and Central India Railway(BB&CIR) as a centralised workshop for broad gauge(BG) locomotives, carriages and wagon stock. Later, as the repair activities were expanded with progressive increases in the holding of locomotives, coaches and wagons, a separate wagon repair workshop was set up at Mahalaxmi in 1910 as an extension to this workshop under its administrative setup [4].