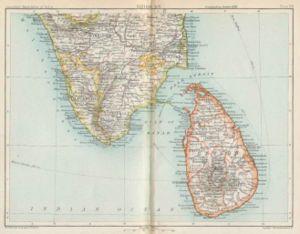 The British gained control of the coastal areas in the 1795-96 War against Dutch in Ceylon but the Kingdom of Kandy continued to rule the central highlands. In 1802 the Treaty of Amiens formally ceded the Dutch territories to Britain and they were declared a Crown Colony so were not a part of British India.

Competing rivals for the Kandyan throne sought assistance from the British and tensions arose when British subjects were maltreated by agents of the Kandyan First Minister. Frederick North, first British Governor of Ceylon, used this as an excuse to invade on 31 January 1803. Two forces were dispatched - one under Maj-Gen Hay MacDowell from Colombo and the other from Trincomalee under Col Barbut. After initial success the British became isolated in hostile territory and subject to guerilla warfare. The garrison at Candy was compelled to surrender under promise of safe conduct but the commander, Major Adam Davie, was taken prisoner and later executed and the garrison massacred almost to a man. The British gained a significant victory at Hanwella and hostilities ceased without a treaty when General Thomas Maitland succeeded North as governor in 1805.