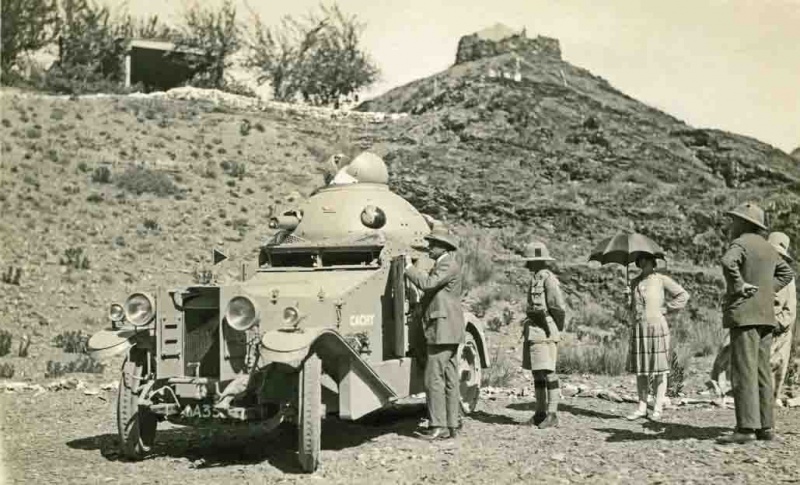 Chris Woods wrote: [1] "I attach a photo of the Crossley...The Tank Museum now has a copy too. It was taken when my uncle, a Brevet Major with the R.I.A.S.C., in 1933 while showing his sister-in-law (under umbrella) and her new husband around various areas of the NWF covered by his work. He was based in Peshawar and shortly after this photo showing CACHY with his guests plus a.n.other in uniform, he was off on the 1st. Mohmand expedition. Although he was not a member of the Tank Corps, I, as a retired mariner, was intrigued in seeing this armoured car named, apparently after a famous tank battle, and was interested in finding out which unit it belonged to and any the history of the vehicle.

...I was asked for permission to publish an article in FIBIWIKI I had written about Norperforce. My above uncle served with both Dunsterforce and Norperforce and there was little in print about the latter hence my notes, and of course, armoured cars were very much involved with these ‘Hush Hush’ ops."

Chris Woods may be contacted by email: [email protected]

Click on a date/time to view the file as it appeared at that time.

The following page uses this file:

This file contains additional information, probably added from the digital camera or scanner used to create or digitize it. If the file has been modified from its original state, some details may not fully reflect the modified file.
Retrieved from "https://wiki.fibis.org/index.php?title=File:ArmouredCarCachy_NWF1933.jpg&oldid=75000"
Categories: