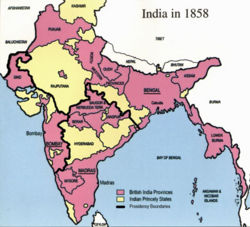 A fortress town on the island of Salsette, 21miles north of Bombay, Thana was a commuter town for the English, set in wooded country-side.It is the HQ of Thane District of Bombay.

Under a treaty the town made over to the Portuguese in 1533, and it became prosperous. Possession was lost in 1739 when the Portuguese lost [Bassein]. Under threat of Portuguese repossession of Salsette and Bassein and after failed negotiation with forces from Poona, the English annexed Thane by taking the Fort by force in 28 December 1771 under General Robert Gordon. Later the fort (built 1737) garrisoned (1813) by a battion of sepoys and the European Artillery from Bombay, later was used as a jail (1913).

The Bombay (Boribunder) to Thana section of the = Great Indian Peninsula RailwayGIPR opened 16th April, 1853 and was the first railway to open in India