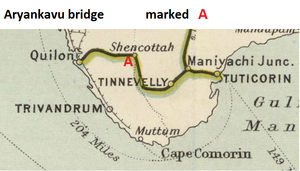 The Aryankavu bridge opened in 1904 and carried the ‘Shencottah-Quilon Section’ of the ‘Tinnevelly-Quilon Railway’ over the Aryankavu River; this was a metre gauge(MG) line operated as part of the ‘South Indian Railway’(SIR).

Various descriptions of this railway have been used in different records

The line was built jointly by the SIR, Travancore State and the Madras Presidency. The line, often called the 'Travancore Railway, was divided into two sections: -

Wikimedia gives an image of the bridge and reports “The 13-arch Aryankavu bridge, nearly 110 years old, at Kazhathuruthi, near Punalur, Kerala, on the Kollam-Sengottai branch line that meanders through thick jungles and hills, is one of the prettiest in India [2].