The Electric Tramway in Colombo initially covered two routes of 3½ miles(5.6km) both using the 3 feet 6 inch ((1066cm) Gauge, and operated on double lines on the roads in the town. Five routes in total were planned converging from all parts of the town to a point within the Fort of Colombo (see Note) .
In 1903 it was recorded that:-
“the cars are neat and convenient and are well patronized, the people taking readily to this considering that only two routes in the city are so far served, it is remarkable that a maximum of 25,000 passengers a day has been attained out of a total population of 150,000” [1].
Another record states that:-
“in 1905 the number of passengers carried was 6,555,338 compared with 6,599,059 during 1904. It seems the tramcars were very popular among the people ” [2]. 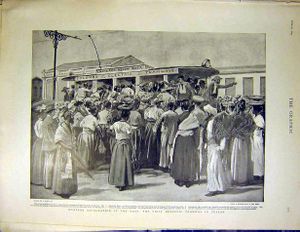 In 1892 the Colombo Municipal Council called for tenders for the construction of tramways in the city. Three years later a contract was signed with a private sector firm, ‘Boustead Brothers’.
The Colombo Electric Tramways were opened for traffic on January 11, 1900 with the ‘Grand Pass Route’ being the first section to open, followed by the . the ‘Borella (Maradana) Route’. Later most parts of the city was covered (see Note) and it became a convenient mode of transport to city dwellers [3].

The Colombo Electric Tramway and Lighting Co Ltd was formed in 1901 to operate the Tramways and generating electric current for street lighting and other purposes. Between 1927 and 1928 the supply of electricity was taken over by the Government [4] .

In 1903 it was recorded that:-
“A large and rapidly-increasing lighting business is being worked from the power-house through a small sub-station within the Fort of Colombo. A feature of this business is a considerable day load caused by the use of slow speed oar bladed fans, which have entirely superseded the punkah. Arc lamps are now being erected along the main tramway routes, and alternating plant is being put down at the Power Station to serve the Galle Face Hotel, the Club, and the various residential portions of Colombo. When the remaining routes are opened to traffic (see Note) a possible good business developed along the tramway routes, and the lighting mains extended throughout Colombo, the undertaking will be far the largest and most complete thing of its kind in the East. ” [1].

In 1929 a tramcar strike occurred and 225 workers including drivers stopped the tram service:-.
“ A strike by Tramcar Workers on 23 January 1929. The anti-strike measures adopted by Whittal Bousteads which owned the Tramcar Services, resulted in the strikers appealing to the public not to patronise tramcars or purchase goods marketed by the Company. The appeal received the support of the consumers, and the students too joined in support of the workers (a gesture that cannot be expected today). As the strike progressed and especially due to Police harassment of the strikers (not different to what is happening today) the strike spread to other institutions and demonstration followed, resulting in clashes between the Police and the demonstrators. That forced the employers to come to the negotiating table and the strike started by 150 tramcar employees, ended with a negotiated settlement after 13 days.”[5].

Note Despite the statements that ‘five routes were planned’ and that ‘most parts of the city would be covered’, no records have been found to substantiate further expansion of the Colombo Tramway

The initial Tramcars were single deck and ‘toast-rack’ trolley poles were first used to pick up the electric power from the overhead cables [6], these can be seen in the image in ‘The Graphic’, 10 Jun 1899. Fibis Comment - this is an artist’s impression pre dating the opening of the Tramway [7]. Later ‘closed centre-entry’ trolley poles were used [6], it seems likely this change was made due to the number of incidents of de-coupling and some accidents. 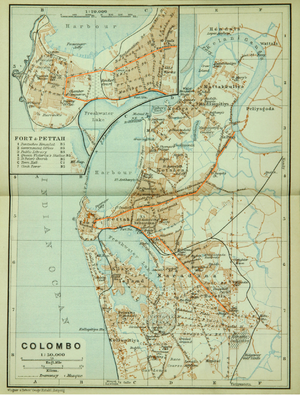 The original two Tramway Routes are shown on map as an ORANGE line and graphically described by Henry Cave in his 1910 Illustrated Guide [8] as :-