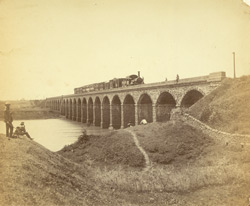 The Dapoorie Viaduct was completed in 1858 by the Great Indian Peninsula Railway(GIPR) and was a vital section from Khandala to Poona of the mainline to link to Madras [2]].

It was one of the early major railway bridge to be constructed and comprised 22 stone arches of about 33 feet (10M) each span [3].

The masonary arches could only span short distances and required many piers [4].

Three of the References cited beow incorrectly state that the Dapoorie Viaduct 'carried the GIPR railway from Thane on Bombay Island to the Indian mainland'.

These References being:- British Library Photograph caption and paragraphs in the two books cited.

It was the Tannah Viaduct, opened in 1854 that connected Bombay Island to the mainland.