The Elphinstone Bridge, Madras was constructed by the Madras Engineers and completed c.1840. It was a stone multi-arched bridge and named after Lord Elphinstone, who was Governor of Madras from 1837 to 1842. It seems to have been completed in about 1840 [1].

The area to the south of the river had been used as hunting grounds by British officials of Fort St. George from the 1680s onwards though Adyar is first mentioned as a suburb of Madras only in a map from the year 1740 when the British purchased the village and integrated it with the Madras Presidency [2].

Before its construction, there were no bridges across the Adyar river except the causeway then known as Marmalong Bridge. Parisals, which were round floats pushed by long poles, were the chief mode of transportation across the river, and there were several makeshift landing places on the banks of the river for carrying goods [3]. The area is subject to severe storms and cyclones and in 1846 a cyclone was registered above 40lb per square foot (90mph/145kph) when the anemometer broke. The wind and storm surge damaged the bridge when one of the massive stone pillars was blown over [4]. The bridge is nearly 1,570 ft (480 mtrs) long and the river is tidal for up to 2.5 miles (4Km) [5] from its mouth. 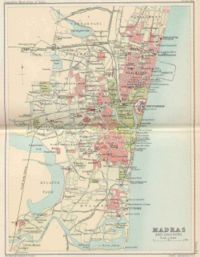 Madras was built on a plain surrounded by lakes called tanks, These discharge into the rivers and as streams through the sandy and swamp ground that surround the city especially to the south.

1838 November, the Court of Directors of the East India Company in London made a reply to 12 letters and reports on the state of the Roads in Madras. The major part was for a new crossing of Adyar River. [6]. An earthen causeway had been put in place to ease the traffic of people and goods across the river. There had been a previous attempt before to build a bridge at this point but it had been washed away shortly after it was built. The causeway was also subject to the rivers conditions. [7]. The lowest crossing was the Marmalong bridge near Saidapet which had been rebuilt in 1726. [8]

As proof of a need a census of users of the causeway was made in March and April 1838 and sent to London [9].

The Court sanctioned the building of an arched bridge on 3 conditions:- i. The foundations are firm and that the arches are a sufficient height and span to prevent floods; ii. The bridge is made of brick or stone; iii. The cost does not exceed Rs70,000 [11].

So that construction could go ahead land on either side had to be purchased from the Nabob for R1,750 [12], and Rs4,500 to Mr Chitty and Mr Hogg for waste ground. A connecting road between South Beach and the bridge at a cost of Rs4,000 with a bridge across the backwater at a cost of Rs4,572 was also sanctioned. [13]

The Elphinstone Bridge became an important and vital link between southern Madras and its ever expanding southern suberbs to the south.

Plans to restore the old bridge by setting up a bird-watching spot along with a garden were part of the phase-II of restoration of the Adyar river estuary. However, with only 58 acres that come under phase-I having been completed, the plan seems to have been put in cold storage [3].