Spelling Note – Futwah was the earlier form of the town – later changed to Fatuha. Modern records refer to this railway as the ‘Fatuha-Islampur Light Railway’. 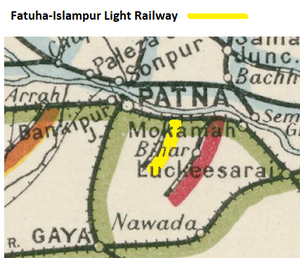 The Futwah-Islampur Light Railway (FILR) was a short 2ft 6in/762mm narrow gauge(NG) branchline located to the west of Bihar and the east of Patna. The line was authorised for construction in 1915 to connect Futwah to Islampur. [1].

The FILR opened in 1922. As a 2ft 6in NG line with a length of 40 miles (64 km). The railway ran parallel to road for almost its entire route [2].
At Futwah (Fatuha) there was an interchange with the mainline East Indian Railway

The FILR was one of several small narrow gauge concerns constructed, owned and worked by Martin's Light Railways, a management company based in Calcutta.
The Futwah-Islampur Light Railway Company Ltd was incorporated in 1915 [3] and was assisted by the District Board of Patna.

The railway operated independently until 1986 when it was taken over by Indian Railways and closed. Subsequently, the line has been converted to broad gauge and connects to the main Delhi line. [5]

An on-line search of the IOR records relating to this railway [6] gives the following: -