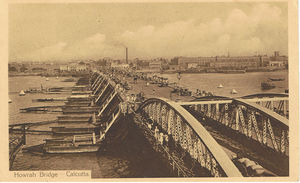 The Howrah Bridge [1] is one of the most recognised landmarks in Calcutta (Kolkata), connecting with its neighbouring industrial city of Howrah over the Hooghly river.
The construction of the Howrah Bridge was first proposed in 1862. The Government of Bengal wanted to build a bridge over the Hooghly River. They asked the Chief Engineer of the East Indian Railway Company to study the feasibility of the idea and come up with a proposal. But for several reasons, his proposal never materialised.
Later in the 1800s, a pontoon bridge or floating bridge was built between Howrah and Kolkata. But it wasn’t strong enough to handle the huge traffic between the two cities or to weather the frequent storms in the area.
The Bengal government continued to look for alternatives and, several decades later, the new bridge was finally commissioned. The contract to build it was awarded to a ‘Braithwaite Burn and Jessop Construction Company’ and constructed without nuts and bolts, the Howrah Bridge was formed by riveting the entire steel structure. The bridge officially opened in 1943 when it was the world’s third longest cantilever bridge. Today, it is the sixth longest bridge of its type in the world.

In 1862, the Government of Bengal asked George Turnbull, chief engineer of the ‘East Indian Railway Company’ to study the feasibility of bridging the Hooghly River. He had recently established the company's rail terminus in Howrah. He reported on 19 March, with large-scale drawings and estimates, that <ref name=WikiHowrah>:-

In view of the increasing traffic across the Hooghly river, a committee had been appointed in 1855-56 to review alternatives for constructing a bridge across it. The plan was shelved in 1859-60, to be revived in 1868, when it was decided that a bridge should be constructed and a newly appointed trust vested to manage it. The Calcutta Port Trust was founded in 1870, and the Legislative department of the then Government of Bengal passed the Howrah Bridge Act in the year 1871 under the Bengal Act IX of 1871, empowering the lieutenant-governor to have the bridge constructed with Government capital under the aegis of the Port Commissioners [1].

Eventually a contract was signed with Sir Bradford Leslie to construct a pontoon bridge. Different parts were constructed in England and shipped to Calcutta, where they were assembled. The assembling period was fraught with problems. The bridge was considerably damaged by the great cyclone on 20 March 1874. A steamer named Egeria broke from her moorings and collided head-on with the bridge, sinking three pontoons and damaging nearly 200 feet of the bridge. The bridge was complete in 1874, at a total cost of Rs. 2.2 million, and opened to traffic on 17 October of that year. The bridge was then 1528 ft. long and 62 ft. wide, with 7-foot wide pavements on either side. From 19 August 1879, the bridge was illuminated by electric lamp-posts, powered by the dynamo at the Mullick Ghat Pumping Station [1].
Initially the bridge was periodically unfastened to allow steamers and other marine vehicles to pass through. Before 1906, the bridge used to be undone for the passage of vessels during daytime only. Since June of that year it started opening at night for all vessels except ocean steamers, which were required to pass through during daytime. As the bridge could not handle the rapidly increasing load, the Port Commissioners started planning in 1905 for a new improved bridge[1].

Plans for a new Bridge

In 1906 the Port Commission appointed a committee headed by R.S. Highet, chief engineer, ‘East Indian Railway’ and W.B. MacCabe, chief engineer, ‘Calcutta Corporation’. They submitted a report stating that[1]:-
Bullock carts formed the eight - thirteenths of the vehicular traffic (as observed on 27 August 1906, the heaviest day's traffic observed in the port of Commissioners 16 days' Census of the vehicular traffic across the existing bridge).
The roadway on the existing bridge is 48 feet wide except at the shore spans where it is only 43 feet in roadways, each 21 feet 6 inches wide. The roadway on the new bridge would be wide enough to take at least two lines of vehicular traffic and one line of trams in each direction and two roadways each 30 feet wide, giving a total width of 60 feet of road way which are quite sufficient for this purpose
The traffic across the existing floating bridge Calcutta & Howrah is very heavy and it is obvious if the new bridge is to be on the same site as the existing bridge, then unless a temporary bridge is provided, there will be serious interruptions to the traffic while existing bridge is being moved to one side to allow the new bridge to be erected on the same site as the present bridge. The committee considered six options:

The committee eventually decided on a floating bridge. It extended tenders to 23 firms for its design and construction. 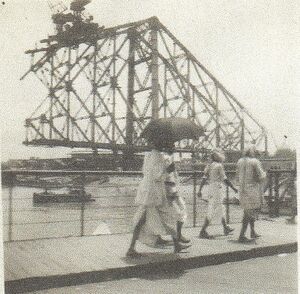 The initial construction process of the bridge was stalled due to the World War I, although the bridge was partially renewed in 1917 and 1927.
The Chief Engineer of the Port Trust, Mr. J. McGlashan, wanted to replace the pontoon bridge, with a permanent structure, as the present bridge interfered with North/South river traffic. Work could not be started as World War I (1914–1918) broke out.
In 1921 a committee of engineers named the 'Mukherjee Committee' was formed, headed by R. N. Mukherji, Sir Clement Hindley, chairman of Calcutta Port Trust and J. McGlashan, Chief Engineer. They referred the matter to Sir Basil Mott, who proposed a single span arch bridge. Charles Alfred O’Grady was one of the Engineers[1].
In 1922 the ‘New Howrah Bridge Commission’ was set up, to which the ‘Mukherjee Committee’ submitted its report. In 1926 the ‘New Howrah Bridge Act’ passed. In 1930 the ‘Goode Committee ‘was formed, comprising S.W. Goode as president, S.N. Mallick, and W.H. Thompson, to investigate and report on the advisability of constructing a pier bridge between Calcutta and Howrah. Based on their recommendation the ‘Rendel, Palmer and Tritton Partnership’ were asked to consider the construction of a suspension bridge of a particular design prepared by their chief draftsman Mr. Walton. On basis of the report, a global tender was floated. The lowest bid came from a German company, but due to increasing political tensions between Germany and Great Britain in 1935, it was not given the contract. 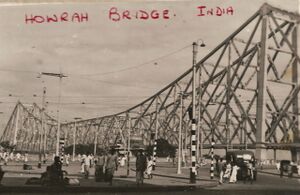 The ‘Braithwaite, Burn & Jessop Construction Co.’ was awarded the construction contract that year. The ‘New Howrah Bridge Act’ was amended in 1935 to reflect this, and construction of the bridge started the next year.
World War II (1939–1945 ) intervened. All the steel that was to come from England were diverted for war effort in Europe. Out of 26,000 tons of steel, that was required for the bridge, only 3000 tons were supplied from England. In spite of the Japanese threat, the then (British) government of India pressed on with the construction. Tata Steel were asked to supply the remaining 23,000 tons of high tension steel called Tiscom and was supplied in time.
The two anchorage caissons were each 16.4 m by 8.2 m, with two wells 4.9 m square. The caissons were so designed that the working chambers within the shafts could be temporarily enclosed by steel diaphragms to allow work under compressed air if required. The caisson at Kolkata side was set at 31.41 m and that at Howrah side at 26.53 m below ground level. The work on the foundation was completed on November 1938.
By the end of 1940, the erection of the cantilevered arms was commenced and was completed in mid-summer of 1941. The two halves of the suspended span, each 282 feet (86 m) long and weighing 2,000 tons, were built in December 1941. The bridge was erected by commencing at the two anchor spans and advancing towards the centre, with the use of creeper cranes moving along the upper chord. 16 hydraulic jacks, each of which had an 800-ton capacity, were pressed into service to join the two halves of the suspended span.