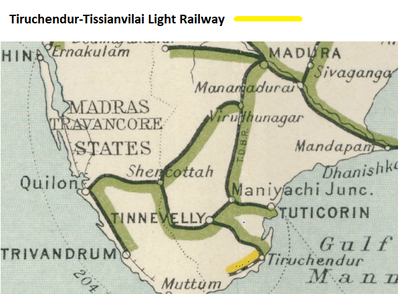 The unassisted private 2ft/610mm narrow gauge(NG) line connecting Tissianvillai to the KPM Sugar Factory and on to Kulasekharapatnam Port, first carried goods in 1915-16 [2].

The line was originally constructed to carry jaggery (cane sugar) for the sole use of Parry & Company, the Managing Agents of the East India Distilleries and Sugar Factories Ltd, the owners of the KPM Sugar Factory. The maintenance and use of the line for the public was authorised on 14 June 1914 and the 18 mile(29km) section from Tissianvillai to the factory at Kulasekharapatnam opened on 8 July 1915 [3].

The South Indian Railway(SIR) encouraged 'Parry & Company' to extend the line to the SIR station at Tuticorn and open it for public use. The local Government authorised its use for public traffic commencing 1915 [4].

The line later was extended to Tiruchendur, a distance of 27 miles(43km) [5] with a short branch to Udangudi and there was a regular daily service for public use as indicated in Bradshaw's Guide Timetable for 1933 [6].

In 1926 the following is recorded "Messers. Parry and Company’s light Railway runs from Tiruchendur to Tissianvilai touching the port of Kulasekarapatnam, which has shipping connection with Colombo and Tuticorin" [7].

This line can be seen in yellow as a NG line on the 1931 Railway Map ‘Imperial Gazetteer of India,’ [8].

The record gives the following [9]:-

The line ceased operation in 1940 and its track was contributed as scrap to the war effort [5].