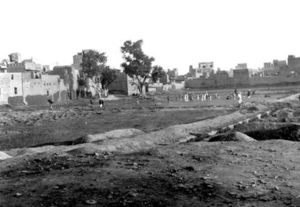 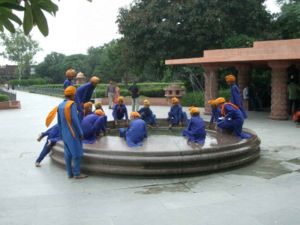 The Amritsar Massacre or Jallianwallah Bagh Massacre occured on 13 April 1919, when over 5,000 unarmed locals, who had gathered at Jallianwala Bagh (garden), Amritsar were fired upon by British Indian Army troops. The crowd was protesting the recently passed Rowlatt Act.

Around 90 troops under the command of Brigadier-General Reginald Dyer fired upon the gathering without giving any warning. Once the firing started, there was no escape from the garden as the main exit was blocked by the troops. The troops only stopped firing once they ran out of ammunition. Estimated casualties were 379 killed and 1,200 injured.

Unofficial History by Field Marshal Sir William Slim 1962, first published 1959. Archive.org Lending Library.
"Aid to the Civil" page 75. “This narrative…is a composite one, made up from the events on three occasions on which the military aided the civil power” (footnote, page 75). Probably c 1919. He was based at Gurampur Fort which is probably a fictional name.