It was under consideration at the same time as the Cuddalore and Salem Tramway/Light Railway proposal, which was not sanctioned.

Masulipatam, (named Machilipatnam today) was founded in the 14th century and it was a major trading port for the British, Dutch and French from the seventeenth century [1]. The port was damaged by a giant ocean wave on 1 November 1864 [2].

Colonel Arthur Thomas Cotton of the Madras Engineers through the Government of Madras Presidency at Fort St George proposed that a railroad calculated for low speed should be substituted for roads of ordinary construction. [3]. The road had been built 25yrs before (1829) and had been left in a serious state of disrepair and required almost complete reconstruction. [4] The Directors of the East India Company apologised for this [5].

Masulipatam was first settled in the 3rd cent BC (BCE) and the British India company built its first factory (producing and dyeing various cloths), there which meant it grew in to a major trading port[1]. Master in his diary of 1677 describes the port and roads thus “the towne was so well stored with able merchants that many ships loads were procured in a space of one or two days” [6]. The lines of communication were very important to sustain the operations and the formation of the road to Hydrabad was of Political and Military importance. The length of road within the Presidency was 115miles (185 km) [7]

Due to the importance of communication between Masulipatam and the hinterland a canal linking the town and the River Krishna had been built. The Buckingham canal would also terminate at the same point in Vijayawada along with a canal linking with the Godavari River. The Directors were however of the opinion that a railroad on the Hydrabad Road would be of an advantage. [8] Much force was given to the comments of Mr Daniel Elliot and Mr Thomas on the advantages and the problems changing modes of transport on the way to the port [9]. They requested that a low speed railway be constructed at a moderate cost, should be tested in such localities that may be most favourable [10]. The traction to be either light engine or animal power [11]. The Madras Government were to select the District and supply the money. Where the experiments were carried out and the result of them is unclear, but the result was that Tramway/Light Railway was not built. 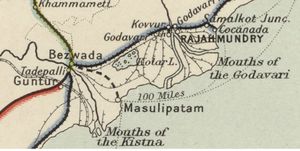 In 1835 the government had decided not to increase expenditure on the road, [12]. However this proposal unsucessfully attempted to reverse this. Then during the Cyclone of 1864 the port, fort and European village were destroyed and the area around the fort became a vast swamp [13]. The arrival of the meter gauge railway in Hyderabad in 1874 [14] meant that it had a better link with the coast at Bombay and it was not commercial viable to use the road to East Coast. The railway finally reached the remaining village in the early 1900’s [15] (shown as Dots on the 1909 map) after bridging the innumerable canals that link the two nearby deltas.

Where the experiments were carried out and the result of them is unclear, but the result was that Tramway/Light Railway was not built.