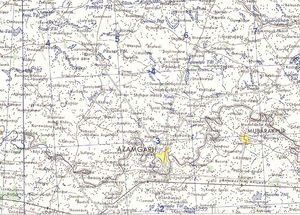 A transport of 10 lakhs of treasure was sent under Lieut Palisser and an escort of irregular horse from Goruckpore to Allahabad. When it reached Azimguhr a further 7 lakhs were picked up with two companies of the 17th Bengal Native Infantry to guard it. The party left Azimguhr on the night of 3 June and immediately the remaining six companies of the regiment rebelled killing Lt Hutchinson and letting the prisoners out of the jail. The sepoys with the police chased after the treasure and forced Palisser to relinquish the treasure. The cavalry stood by their officers and escorted him to Allahabad.

The most European residents of Azimguhr fled to Ghazipore but a few were left behind. Edward Venables, an indigo planter, returned to his estate, armed his workers and secured Azimguhr against the returning sepoys.