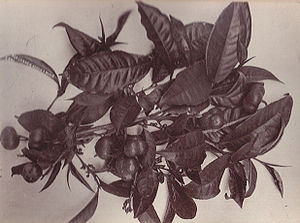 Tea drinking became very fashionable in Britain in the 17th century – an occupation which was possibly precipitated by the marriage between Charles II and Catherine de Braganza in 1662 as this habit was popular in Europe at the time. Moreover, Charles II had spent much time in Holland and it was the Dutch who were early importers of tea from Asia to Europe.

Tea was indeed a sought after luxury and, in fact, a large chest of tea formed part of the dowry that accompanied Catherine. Also forming part of this dowry was the gift of Bombay, which allowed the East India Company to assume a strong foothold in India. This enabled the Company to trade with China and obtain a direct supply of tea.

The tea industry in Britain flourished and subsidiary industries arose as the most beautiful teapots and tea services were evidenced in fashionable circles. This popularity in tea drinking was especially encouraged by the British government as it was realised that lucrative profit could be made from the levying of import taxes on the tea obtained by the East India Company.

Until 1773 the tea was sold exclusively in London to the various merchants and retailers but as the East India Company began to face financial difficulties, a Tea Act was passed whereby it was agreed the Company could distribute the tea directly to other British Colonies - particularly those in North America. This enabled tea to be offered abroad at a competitive price as the usual import tax did not apply, and the cost was lower even than of smuggled tea (which often came from Holland). However, the ensuing East India Company’s monopoly of the tea trade was not popular – and some part of this was because the cost was seen to be controlled by the British Government. This unpopularity is evidenced in the events of the Boston Tea Party in 1773, when the contents of tea chests held on East India company ships were seized and emptied overboard. (This was, in fact, one of the incidents which signalled the beginning of the American War of Independence).

China remained the supplier of tea to Britain , via the East India Company, from around 1700 to 1830. However, the demand for goods from Canton exceeded the supply and this was causing a trade deficit. It was important that the Company could entice China to accept more from them. From about 1780 onwards the inducement came in the form of opium. This Opium trade quickly escalated but the effect of the drug began to cause problems in China and eventually gave rise to the Opium Wars as the Chinese Government fought to rid their country of addiction.

Cultivation of Tea Grown in India

Fortunately, by this time Britain had realised the potential of growing tea in India itself and the first Tea Plantation was cultivated in Assam in the early 1830s. At first the tea plants were imported from China to be grown in Indian soil but soon local plants were substituted. The industry thrived and soon spread to other parts of India.

Tea was originally brought to Britain in huge sailing vessels known as “Tea clippers”. The last known example of one of these ships is the “Cutty Sark” which remains a popular tourist attraction in Greenwich (UK) to this day.

A Brief History of Tea by Roy Moxham (2009). For Review see Other occupations reading list. This title can be ordered via the FIBIS Shop