Originally there were Seven Islands of Bombay:

They were gradually merged by land reclamation until they were one land mass by 1845.

Located on the inlet of Bom Bahia (beautiful bay), the city was Portuguese controlled from 1534. It passed to British rule in 1661 when it was received by Charles II as part of his marriage dowry from his Portuguese wife, Catherine of Braganza. During this time there were three Royal Governors. In 1668 it was granted to the East India Company for a lease of ten pounds a year and was administered by Company Governors. These became Crown Governors when rule was transferred to the UK government. Until the 18th century, Bombay consisted of seven islands. The islands were merged to form the present day location of the city.

Compared to the other Presidencies, Bombay was of minor significance before 1800. The English were very much the minority. Recognising this, a liberal attitude encouraged progressive Indian cotton merchants, this freedom resulted in Bombay's economic importance. It was the cotton industry that spurred economic migration to the city from surrounding rural areas, and saw Bombay’s population grow rapidly:

Following the Battle of Kirkee 1817 and the defeat of the Peshwas, the Bhor Ghat road to Poona opened 1830, allowing greater access to the Deccan cotton fields. Bombay became the commercial centre of the Malwa opium trade, and opium also became the basis for the prosperity of Bombay.[1] Railways much improved goods transport, the Great Indian Peninsula Railway (GIPR)opened in 1864. This allowed Bombay to fill the global demand for cotton resulting from shortages as a consequence of the American Civil War’s blockade of its southern ports(1860-1865). The opening of the Suez Canal 1869 further shortened the passage to England. The resultant economic boom saw wealthy businessmen sponsor many civic buildings – University Library Buildings, Jamsetji Jijibhoy (JJ) School of Art, and the Mechanics Institute. From the 1860‘s many municipal improvement schemes focused on improving health and sanitation.

Because of the cosmopolitan mix of Bombay Society, it is architecturally unlike the most of colonial india's neo-classicism; the wealth citizens of Bombay, and the city's Public Works Department opted for Venetian-Gothic designs with alterations to suit the Indian Climate. Victoria Terminus the station of the GIPR, adorned with Indian motifs represents this patronage. Bombay introduced Modernist architecture to India seeing new concrete construction methods as an inclusive architecture available to India's masses in the lead up to Independence.

The Bombay City Improvement Trust was created on December 9, 1898, in response to the Bobbay plague epidemic of 1896. It was created through an Act of the Parliament. The Municipal Corporation and the government handed over all vacant lands to this body. The Trust undertook a host of measures to improve sanitary and living conditions in the city. The planned opening up of suburbs was due to the Trust [2]

The Trust widened roads in the central, crowded, parts of the town. A new east-west road, the Princess Street, was constructed to channel the sea air into the centre of the crowded residential areas. The north-south Sydenham Road (now Mohammedali Road) was also constructed with this end in view [2].

The Dadar-Matunga-Wadala-Sion suburban development was started in 1899 with the express purpose of relieving congestion to the south. Well-laid out plots, with mixed land-use patterns marked these sections. Completed in 1900, access to these parts were through the newly completed Mohammedali Road [2].

The Trust was later merged with the Municipal Corporation and known as the Bombay Development Department/Directorate. 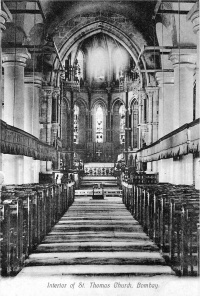 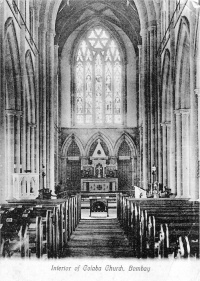 Roman Catholic
Addresses of all current Catholic Churches in Mumbai (Archdiocese of Mumbai). See also Bombay in the Catholic Encyclopedia 1913. 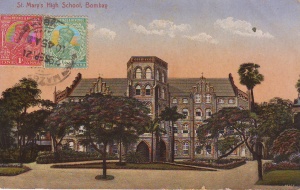 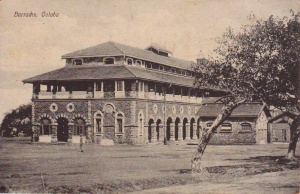 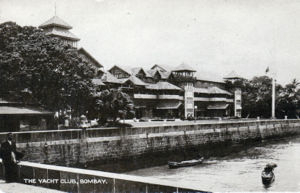 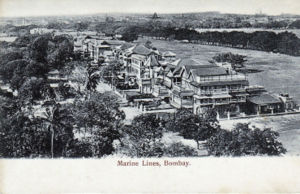 Growing up in Bombay

A Voyage To Surat In The Year 1689 by John Ovington, edited by H G Rawlinson, with commentary, 1929 Archive.org. Some words may be missing due to the scanning. 1994 reprint of the 1929 edition Archive.org.

A Financial Chapter in the History of Bombay City 1864-65 by Dinsha Edulji Wacha 2nd Edition 1910 Archive.org. Includes the failure of the Bank of Bombay.
Rise and Growth of Bombay Municipal Government by D. E. Wacha 1913 Archive.org

The Bombay Riots of 1874 by “W” (Printed for Private Circulation). Printed at the Times of India, Office. 1874 Google Books. Verses.

Glimpses of Old Bombay and Western India, with other Papers by James Douglas 1900 Archive.org