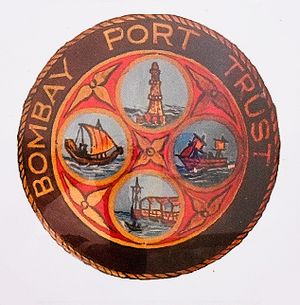 The 'Elpinstone Land and Press Company' was formed in 1858 to reclaim two large parcels of land on the south-east side of the Bombay peninsular [1]:-

The company went bankrupt in the 1865 crash, and their equipment, along with the reclaimed land was divided partly given to the GIPR and partly to the newly formed Bombay Port Trust. The equipment included broad gauge(BG) locomotives [1]. 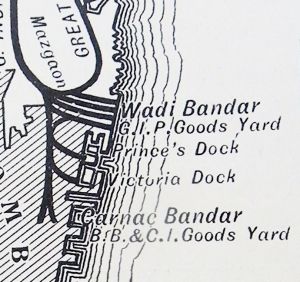 'Bombay Port Trust' was created in 1873 and modelled on the Mersey Board in England to control all harbour activities. It undertook extensive land reclamation work, and the creation of docks
Half of all Indian exports passed through Bombay's docks. [2]

John Fleming was responsible for the establishment of the 'Bombay Port Trust' and involved in the land reclamatiion projects of the mid 1860's. In 1884 Fleming went on to form 'John Fleming & Co' a company of Merchants and Agents [3].

The railway system for the Port Trust was sanctioned in 1913, The first part to open in 1915 was the section between from the GIPR line at Wadlala Junction via the Victoria overbridge to the Docks, a length of nearly 14 miles(22km). In addition to the BG spur lines a dedicated line opened in 1915 ran from Ballard Pier to Wadala. Along this railway were built grain and fuel oil depots. The kerosene oil installations were developed at Sewri and for petrol at Wadala. [4] [5]

Within the docks there were a further 104 miles(166km) of track, giving a total of 118 miles(189km). The system was primarily a goods operation but passenger trains were operated over Port Trust track, mainly troop trans and postal and passenger trains in connection with the mail steamers [6]. The Raoli Junction to Ballard Pier section and from Manson Road to Alexandra Dock sections opened in 1915, [7].

Railway sidings spurred off the broad gauge(BG) Great Indian Peninsula Railway(GIPR) mainline to a collection of sidings to the docks in the east Bombay.
There were numerous spurs to:-