From FIBIwiki
(Redirected from GIPR)
Jump to navigation Jump to search 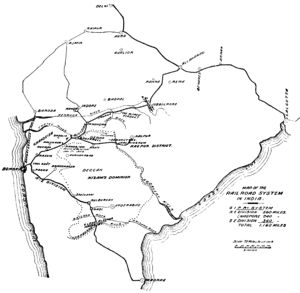 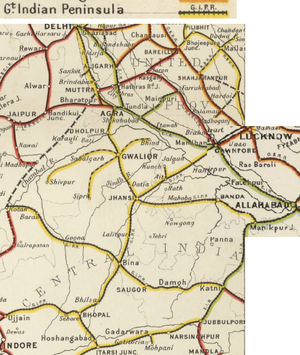 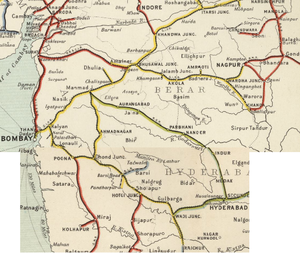 Like most of the early railways in India, the Great Indian Peninsula Railway (GIPR) was a British company, registered in London, privately owned and financed, operating under licence and guarantee from the (British) Board of Control in India and the East India Company (EIC). The GIPR was India's and Asia's first railway.

The principal economic benefit of the GIPR was the opening up of the interior to Port and City of Bombay. The narrow coastal plain of India's west side is separated from the Deccan plateau by a mountain range, the Western Ghats which rises to 3,900 feet(1200m) and which has always restricted internal communication with the Arabian Sea.

The challenge was to create two lines through the Western Ghats, one to the north-east and one to the south-east, these were fully open by 1865 in time for cotton from the Deccan to be exported from Bombay to Manchester thus filling the trade gap created by the American Civil War. The lines were exteded to link Bombay to Calcutta and Madras by 1870.

The GIPR Chief Engineer James John Berkley's proposal was to form a grand trunk communication by the north-eastern mainline between Bombay and Calcutta,

With the completion of the GIPR mainlines the three Presidency Capitals of Bombay, Madras and Calcutta were linked. The length of the route opened was then 1483 miles(2388 km) [3].

The GIPR continued to expand its network with the addition of 'Branch Lines', certain railways being ‘Absorbed’ and 'Working Agreements' on other railways - See separate page - GIPR Lines Owned and Worked

Bombay's Victoria Terminus was both the principal station and GIPR's HQ; designed by architect Frederick William Stevens. Victoria Terminus Construction commenced in 1878, it opened on Queen Victoria's 1887 Golden Jubilee and completed in 1888. 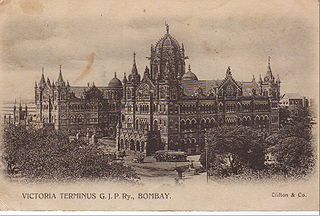 See separate pages for details of the Stations and Rail System into the following major Cities:-

The GIPR had a collection of sidings spurring off to the docks in the east Bombay. There were numerous spurs to:

The GIPR operated an extensive network of railways of broad gauge(BG). In 1905 the route mileage was 1562 miles(2514km) and by 1918 was 2553 miles(4109km) divided into three sections ‘North East Division’, ‘South East Division’ and ‘Midland Division’ and their associated branches.

An on-line search of the India Office Records (IOR) records relating to this railway [14] gives 136 references. The most important being:-

Once inside the digital file, click on Contents for image titles. includes photographs whose titles include GIPR 1868-1869.